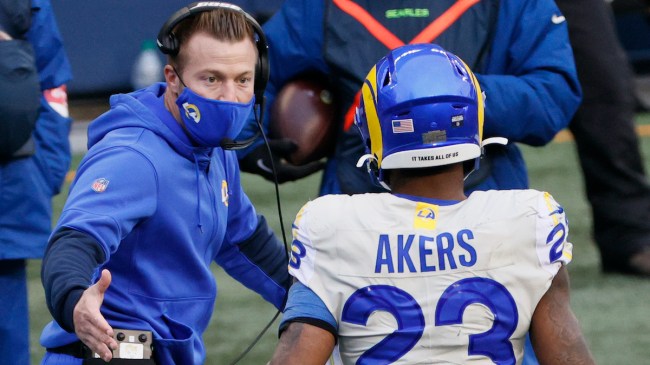 It was rough Thursday night for the Los Angeles Rams in their season opener and it was particularly so for running back Cam Akers.

Much to the dismay of fantasy football players everywhere, Akers barely saw the field in the loss to the Buffalo Bills. Although reports had him listed as RB1 coming out of the preseason, he only saw 12 snaps and even fewer carries (3) for a grand total of 0 yards.

With the questions swirling around what went wrong, head coach Sean McVay provided some answers a day after the game. He praised the running back’s playmaking abilities but explained that the team needs to see “an increased level of urgency and accountability snap in and snap out.”

On Wednesday, McVay revealed he had a conversation with Akers about the comments and it appears things are trending in the right direction.

"I like the way that he went through the first walkthrough of the week. I liked his focus and concentration in the meetings and I expect that to translate to practice."

Cam Akers Did Not Expect Limited Workload Against The Bills

Akers was also asked about the situation and offered his own perspective on it. He claimed the conversation with McVay happened during training camp and he wasn’t expecting the limited workload.

"Don’t want to make it too big, bigger than what it is.”

Akers was certainly frustrated with the Rams’ decision, but he’s making sure to take his coach’s comments to heart. Ultimately, it was only Week 1 and he noted that 16 games still remain for him to prove his worth.

“Whatever Coach says, I’m going to take it and I’m going to learn from it. … Whether I think it’s right or not, maybe I’m not always in the right.”

It might’ve been a bumpy start, but the fact that he’s open to criticism and handling it quite well is a good sign. Akers believes McVay’s comments are likely tied to practice and went on to state his desire to improve.

"I'm on the screws. As close to perfect as possible.

Is he expecting to show what he's capable of in the weeks to come?

It seems Akers is willing to do whatever it takes to get back in McVay’s good graces. Hopefully, that’ll be seen in the coming weeks.

Darrell Henderson will likely remain the preferred option until Cam Akers proves that he’s deserving of the role. Henderson put up 47 yards on 13 carries with a handful of receptions against the Bills.

With WR Allen Robinson also delivering an underwhelming performance, the Rams have more than enough issues on their hands currently.

The team will need a bounce back in Week 2 against the Atlanta Falcons. While it’s not certain Akers will see more playing time, it’d be hard for him to receive less.

It's not looking good for fantasy football owners with 49ers RBs.https://t.co/uLOcXefycI

Fantasy football players should still be wary since it appears Henderson will continue to split touches either way.