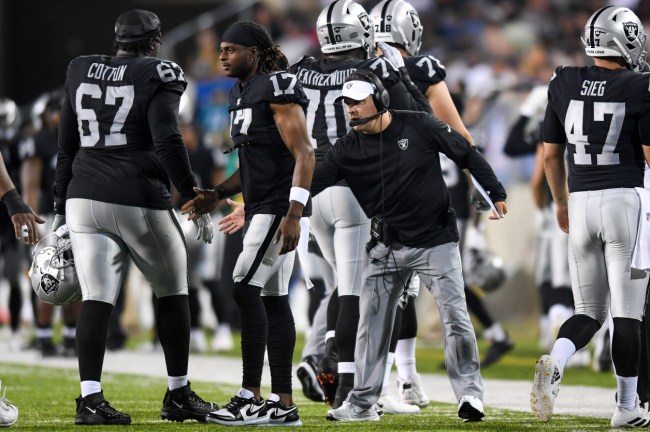 Raiders fans are licking their chops, waiting to see the new QB-WR duo of Derek Carr and Davante Adams and the former Fresno State teammates reuniting.

"you'll definitely see him at the stadium"

Sounds an awful lot like Bill Belichick, right? After all, McDaniels spent a ton of time on Belichick’s staff with the New England Patriots.

The Raiders face the Minnesota Vikings on Sunday night at Allegiant Stadium, so the home crowd likely wants to see Adams play at least one drive.

The Raiders did win the Hall of Fame Game against the Jacksonville Jaguars, 27-11, although neither Carr nor Adams saw a snap in that contest.

It is unlikely that either one of them suits up for Sunday, but McDaniels’ comments sure make it seem like a distinct possibility.

The Raiders made the playoffs last season after a thrilling finish in the Week 18 contest against the Los Angeles Chargers, although they lost the first week of the playoffs to the Cincinnati Bengals.

If Adams does see the field on Sunday, there will be plenty of excited fans in Las Vegas.