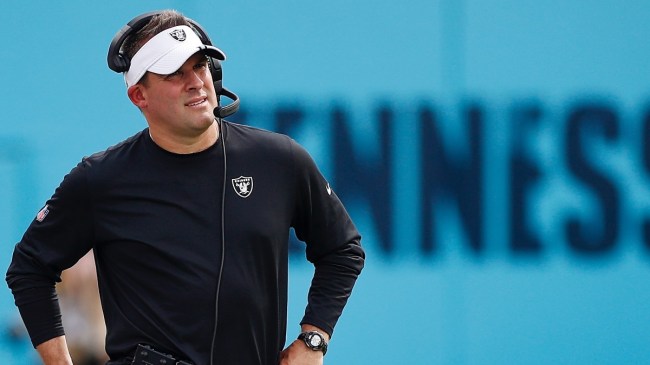 It’s been quite the last twelve months or so for Las Vegas Raider head coaches. Jon Gruden was fired in disgrace after a scandal about racist and offensive emails sent to former Commanders’ President Bruce Allen. Rich Bisaccia took over and led the team to the playoffs, where they fell in the Wild Card Round to the Cincinnati Bengals.

Owner Mark Davis decided to not go with Bisaccia as the full-time coach and hired former Broncos head coach and longtime Patriots offensive coordinator Josh McDaniels to lead the franchise. But, the Raiders have started 0-3, and trouble is already brewing.

The Raiders dropped a 24-22 heartbreaker to the Titans as they could not convert the tying two-point conversion. They had been outplayed for most of the game, though. That must have upset Davis. After the game, he met with McDaniels for a long time.

That is, well, not good. It’s only week three and Davis is obviously already not sure that McDaniels is the best option for the Raiders. He has a reputation for being less volatile than his late father Al, but the pressure is definitely on Josh McDaniels to figure it out. Las Vegas had pretty big expectations coming into the year. And, in a brutal AFC West, they better improve quickly.

Vegas fans are not happy. This tweet has picked up a lot of steam on Raiders’ Twitter.

RT if you want the @Raiders to FIRE Josh McDaniels. #RaiderNation

Since his 6-0 start in Denver thirteen years ago, he has a winning percentage of .200.

And, fans of Las Vegas are already fed up with his playcalling, which is supposed to be a strength for McDaniels.

This fan thinks McDaniels’ seat is merely warm. I would have to disagree. They are in win-now mode with big money owed to quarterback Derek Carr and wide receiver Davante Adams.

Sorry but McDaniels isn’t getting fired right now. He’s not even on the hot seat yet. It’s warm, but 3 losses in 14 days isn’t deciding things.

Game plan was trash. Kudos to defense for keeping us in it.

With that said, an October coaching change last year led to a playoff run.

This is certainly a story worth following as the season goes on.