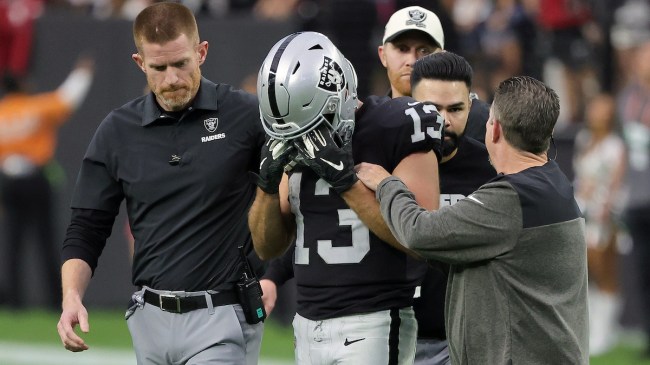 Flashforward to Week 2 of the season, the Raiders are 0-2 and last in the AFC West. The team followed up their season-opening loss to the Los Angeles Chargers with an even more spectacular choke job against the Arizona Cardinals on Sunday.

After going up 20-0 in the first half, the Raiders would only score one field goal for the remainder. Kyler Murray and the Cardinals fought back to take home the victory in overtime, meaning the Raiders had just blown the largest lead in their franchise history.

That is the largest blown lead (20 points) in Raiders HISTORY pic.twitter.com/Gq8DDUFRMZ

There are plenty of moments that fans can name as the turning point in the game. The easy standout is Murrary’s absolutely insane 2-point conversion, where he scrambled for 84 yards and over 20 seconds to bring the game within one score.

Or perhaps, it was when the Cardinals actually managed to force overtime with a touchdown and another 2-point conversion as the time expired.

Hunter Renfrow’s two OT fumbles surely didn’t help either. The second of which was returned for a 59-yard touchdown to give the Cardinals the win. But he isn’t responsible for shouldering the entire blame.

Adams only had 2 catches for 12 yards and Carr was simply not Aaron Rodgers-like with his accuracy.

It was truly a team effort for the Raiders to make history with their largest blown lead ever (20). For obvious reasons, Raider Nation was not pleased with the performance.

Bro the raiders be having me go through it..

At this point, Raiders fans have gotten all too used to the disappointment. In the last 20 seasons, the team has only finished with a regular season winning record three times. Despite all the hype, so far the 2022 season isn’t looking any more promising.

Raiders fans been watching the games just numb to this shit for the last 20 years.

The Raiders have suffered heartbreak before, but this one takes the cake for some fans. It is a historic loss after all.

I have seen some sick Raiders losses. That one is down there.

Been a raider fan for 50 years. Worst loss ever. @Raiders

It’s clearly not easy being a part of Raider Nation, especially since 2022 hasn’t been their year as expected.

It doesn’t get worse than being last in the AFC West standings, somehow behind Nathaniel Hackett and the Denver Broncos. The Raiders will look to bounce back in Week 3 against the Tennessee Titans.

It should prove to be an easier matchup, but the Raiders haven’t lived up to expectations so far.

To makes matters worse, it seems even a 20-point lead is no longer enough for them to secure a win. It’s only Week 2 so the Raiders still have plenty of time. However, this recent run of poor performances can’t continue if they hope to make the playoffs.