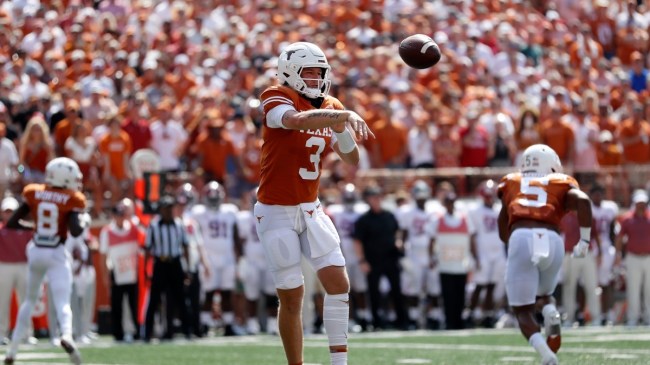 We can’t say for certain that Texas is back yet, though they certainly looked it against Alabama in a 20-19 loss.
The Longhorns led most of the game, only to lose on a late field goal against the top-ranked Crimson Tide.

In that loss, starting quarterback and all-world recruit Quinn Ewers left early in the game after an electrifying first quarter in which he led the Longhorns up and down the field. Ewers was diagnosed with a sprain in his left AC joint after being landed on. The original timeline was 4-6 weeks for Ewers. But, it appears that may not be the case.

Ewers will dress for Texas in their game against Texas Tech

Originally, many longhorn fans were hoping for Ewers to be back for the Red River Shootout against Oklahoma on October 8th. But, it seems like Ewers could be available much sooner than that.

Quinn Ewers will travel to Texas Tech and suit up according to HC Steve Sarkisian.

Ewers is ahead of schedule on what was originally a 4-6 week timeline for an SC joint sprain 🙌 pic.twitter.com/TqEWEYeEEG

Maybe this is just Coach Steve Sarkisian giving Texas Tech something else to gameplan for. But, it could be that Ewers is actually ready to go. The injury is to his non-throwing shoulder, so it’s conceivable he could be ready to play just two weeks after the initial injury.

Longhorns fans are welcoming the news

Naturally, Texas fans are loving the news. The signal-caller was the top recruit in America for the 2022 class before reclassifying to 2021 and enrolling at Ohio State. He decided to transfer to the school he was originally committed to in Texas and beat out Hudson Card for the starting job.

He did suit up last week at home against UTSA as well. But, there are no roster limitations on home games. Only 70 can travel to away games, and Texas using a spot on Ewers shows that he could definitely start on Saturday.

It’s in time for the start of Big 12 play, a conference I think Texas will win if he can stay healthy.