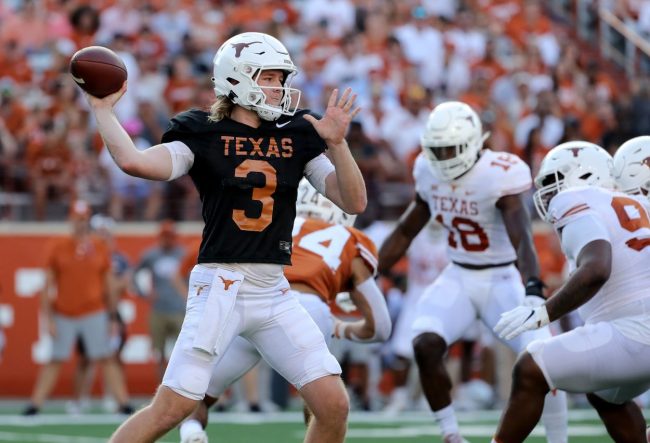 The Quinn Ewers Era has officially begun for the Texas Longhorns.

Texas head coach Steve Sarkisian, who is bullish on his squad entering the 2022 season, officially named the redshirt freshman the team’s starting quarterback on Friday afternoon.

Ewers had been competing with redshirt sophomore Hudson Card, who started five games for the Longhorns a year ago. He impressed early in spring practice, but recent reports stated the young gunslinger had struggled with accuracy and interceptions over the summer.

Ewers’ path back to his home-state school was a long and winding one. He was long considered the top overall recruiting in the class of 2022 and committed to Texas and then-coach Tom Herman in August of 2020. Just two months later, Ewers decommitted from the Longhorns and flipped to the Ohio State Buckeyes. Shortly thereafter, he reclassified to the class of 2021 and joined the Buckeyes while signing a massive NIL deal.

Ewers struggled to find playing time as a true freshman with the emergence of Ohio State quarterback CJ Stroud. He then entered the transfer portal following the season, ending up back at Texas where he first pledged his commitment.

The return of their prodigal son had Texas fans and even some coaches riding high heading into the 2022 season. But its yet to be seen if Ewers can deliver on the all the hype.

Really looking forward to Ewers at QB for my Longhorns this season. He's the best QB prospect we've had since Colt McCoy. It's going to be pretty wild when Manning comes on board next season. https://t.co/46Ib8zBQcU

I'm big time hyped about Quinn Ewers.
He has some weapons, let's see what he can do in Year 1. https://t.co/QjVa4ka0do

If he can’t, 2023 five-star QB commit Arch Manning figures to be hot on his heels a year down the road.

Ask and ye shall receive. Shortly after Ohio State QB CJ Stroud asks about the Big Ten paying players, conference commissioner Kevin Warren says it may be a reality. https://t.co/9iFBOkL0z1