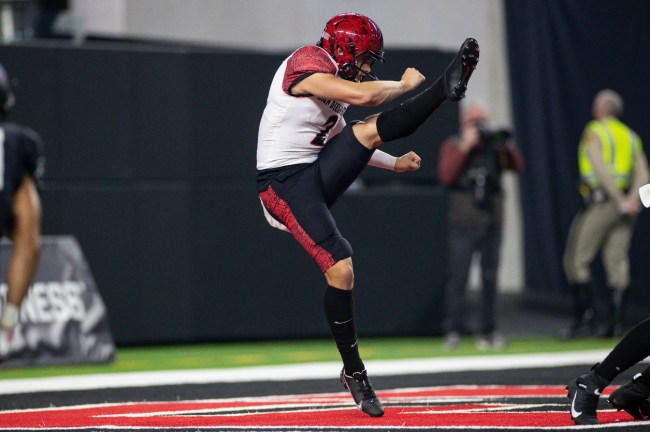 The Punt God has arrived in Buffalo.

The Bills have a new sensation, although this time it is a special teams guy. Former San Diego State star Matt Araiza was selected by Buffalo in the sixth round of the 2022 NFL Draft, and the proclaimed Punt God is already dropping jaws at the end of May.

On Tuesday, Araiza dropped an unbelievable punt at practice.

Yes, this is a real punt and nobody could believe it happened.

Pat McAfee was one person to show his approval of Araiza’s massive bout at practice — and that is some good company.

The reactions to Araiza’s punt came pouring in quickly, and the Bills rookie is set to become a weekly show if he keeps performing like this.

What the actual hell? He booted this one into Lake Erie. #BillsMafia https://t.co/ZKkDLF3WaT

So not only do we have potentially the best offense in the NFL, but we also have a punter with the potential to pin our opponents deep from any spot on the field? 😃

Araiza did this plenty during his time at San Diego State and he also performed well as the placekicker. However, he is named the Punt God for a reason — and the reason is because of plays such as the one above.

Get ready Bills fans, Araiza is set to do this often — or not so often, depending on how good the Bills are during the 2022 campaign.