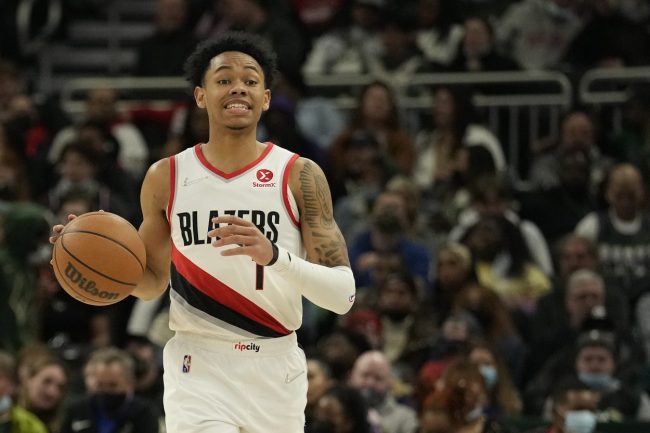 Not much went right for the Portland Trailblazers in the 2021-22 season.

In Chauncey Billups’ first year as head coach, superstar Damian Lillard missed most of the year due to injury, CJ McCollum got traded to the New Orleans Pelicans and the Blazers finished with the sixth-worst record in the league.

The one bright spot, however, was fourth-year shooting guard Anfernee Simons.

With Lillard out and McCollum gone, Simons bore the brunt of the offensive product for Portland. The 22-year-old shined in his new role. He averaged a career-high 17.3 points per game or 40.5 percent beyond-the-arc. Simons also dished out a career-high 3.9 assists per game.

Simons To Secure The Bag In Free Agency

His breakout campaign came at a good time, as Simons is set to be a restricted free agent when the period officially begins on Thursday. But according to Bleacher Report’s Jake Fischer, he doesn’t plan on going anywhere.

Fischer says that the Blazers are set to offer their budding star a four-year deal that’s north of $80M, and that Simons is expected to accept.

That’s just one of multiple moves Fischer reports the Blazers are working on to build around Lillard. The organization traded for 2020 Olympic Gold Medalist Jerami Grant last week and are expected to offer starting center Jusuf Nurkic a long-term extension. Portland could also make a run at veteran guard Joe Ingles, who is currently rehabbing after a torn ACL.

Add that to Lillard’s aggressive push to lure Kevin Durant to the Blazers and suddenly Portland has one of the crazier offseasons across the NBA.