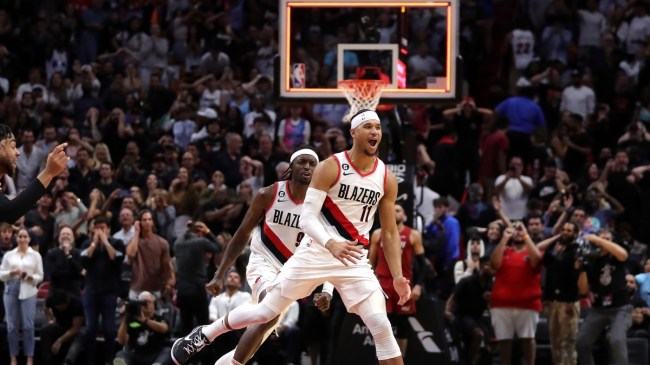 The Portland Trailblazers have been one of the most surprising teams in the NBA in the early going. After an offseason where trade rumors around franchise player Damian Lillard were rampant, the Blazers decided to keep their star. And, it’s paid off. The team was considered an underdog to make the playoffs heading into the season. After all, the roster outside of Lillard isn’t great. But, they’ve defied the odds.

Entering Monday’s game against the Miami Heat, the team sat at 6-3, good for 5th in the Western Conference. Still, they were a significant underdog against the Heat, and were 7 1/2 point dogs on most books. They didn’t let that phase them, though, and now have a signature moment in the early part of the season.

With the game tied at 107 with 6.2 seconds left, the Blazers had to go the length of the floor if they wanted to score and win. That’s what they did, as Lillard got it, drove into the defense and fought Hart alone in the corner. The great shooter knocked it down, giving them the 110-107 win.

Here’s an angle from inside the arena.

Josh Hart with the buzzer-beater 3 for the Blazers who win 110-107 at Miami after the Heat had tied it up seconds before.

He’s the third Portland player to hit a buzzer-beater this year.

So far this season, Anfernee Simons, Jerami Grant, and Josh Hart have hit game-winners for the Blazers.

Dame Time is in full effect in Portland 🙌 pic.twitter.com/bFAfxBJUIL

Of course, Twitter was ablaze after the buzzer beater.

Got a lot of love for Miami but man… that was good win. S/o to Obama44 aka @joshhart. THAT GUY! Back at it Wednesday #JusWin #BlazersRoll

JOSH HART WHAT A WAY TO REDEEM YOURSELF 🔥🔥

They’ll be back in action Wednesday in Charlotte against the Hornets.