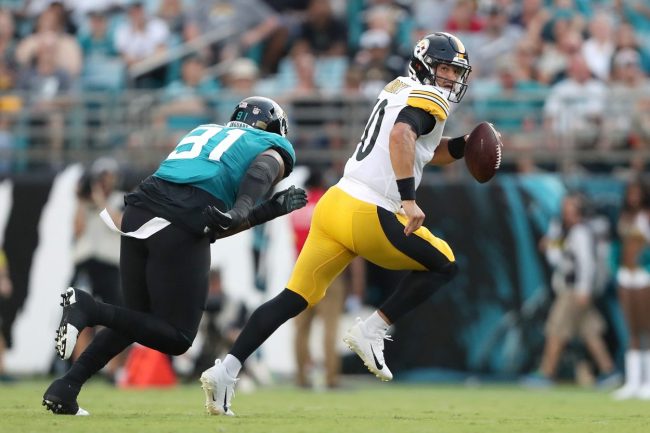 The competition to see who starts at quarterback for the Pittsburgh Steelers in week one has been must-see TV.

The Steelers’ QB1 job is up for grabs after the retirement of future Hall of Famer Ben Roethlisberger. There are three main combatants: returning backup Mason Rudolph, former No. 2 overall pick Mitchell Trubisky, and 2022 first-round pick Kenny Pickett.

Trubisky entered the race as the presumed favorite, though Rudolph refused to cede the spot and Pickett made good early impressions on his teammates. The chances of Pickett winning the starting job grew larger and larger amid reports of Trubisky’s struggles at training camp.

The hype quickly died down, however, as Pickett landed third behind Trubisky and Rudolph on the team’s initial preseason depth chart.

Then the preseason began and the rookie from Pitt absolutely set the world alight. Pickett went 13-of-15 for 95 yards and two touchdowns, including a late game-winner against the Seattle Seahawks in preseason week one.

In week two, he was just as good. Pickett went 6-of-7 for 76 yards and a touchdown in two second-quarter possessions against the Jacksonville Jaguars.

Both the hype and momentum appeared to be heading in the direction of Pickett. But the latest reports indicate that may not be the case.

.@diannaESPN was told by a Steelers source that the Steelers' starting QB job is "Mitchell Trubisky's job to lose" 👀

Who do YOU think should start in Pittsburgh? 🤔 pic.twitter.com/zXWYyOtQyd

ESPN’s Dianna Russini reported on Thursday morning that she’s been told the job is “Mitchell Trubisky’s job to lose.”

“So while this competition is heating up and all you hear is great things about this rookie, I was told by a Steelers’ source last night that this is Mitchell Trubisky’s job to lose,” she said. “He is the starter in Pittsburgh, as good as Kenny’s playing. And the organization has been very impressed with Pickett’s play on the field and his overall knowledge in the classroom, but for now this is Trubisky’s job.”

Trubisky has 50 NFL starts to his name and a 29-21 career record. But he’s never had better than a 2-to-1 touchdown to interception ratio and is now on his third NFL team in six years.

What does this mean? 🤔 https://t.co/c4KhsRJCyt

Mike Tomlin and the Steelers don’t seem bothered by those number, and it appears Pickett will just have to wait.