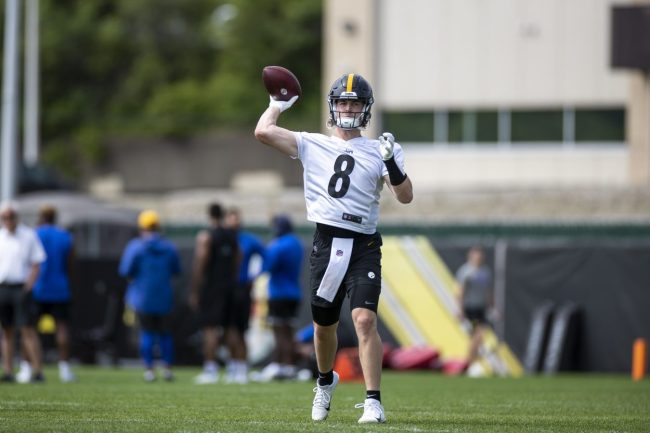 The Pittsburgh Steelers’ quarterback situation is anything but encouraging for fans of the team. Longtime backup Mason Rudolph thinks he should be the team’s starter. Free agent signing Mitch Trubisky can’t seem to hit water from a boat, and first-round pick Kenny Pickett hasn’t particularly lit it up in his early showings.

Until now, nobody has had a particularly good read on what head coach Mike Tomlin would do at the position. That got cleared up slightly on Friday, and it’s not a very good sign for the rookie out of Pitt.

Our initial 2022 depth chart has been released.

The Steelers released their first depth chart of the season as they exit training camp and officially enter the preseason, and it doesn’t paint a particularly pretty picture for Pickett.

The young signal caller, whom team captain Cam Heyward has nicknamed “Burger King hands,” checks in at third on the chart. Trubisky, despite his awful showing, grabbed the starting spot ahead of Rudolph, who is list as the first backup. Pickett is only ahead of somebody named Chris Oladokun, whom the internet tells me was a seventh-round pick this year out of South Dakota State.

Now, it’s only the first preseason game. Plenty of rookie quarterbacks struggle early on, even stars such as Patrick Mahomes and Justin Herbert.

But part of Pickett’s allure was that he was a sixth-year college quarterback who brought maturity and a more pro-ready game to Pittsburgh. Instead, Steelers fans have begun to turn up the panic meter.

@MarkMaddenX So first depth chart has Kenny Pickett as #3. They have the highest paid defense in the league and Watt says Super Bowl or bust and they spent the 20th pick on a luxury. GTFOH

Drafting Kenny Pickett was the worst thing to ever happen to this town. Now we have to hear about this non stop nonsense until he eventually hits free agency and becomes a backup for some bad team

The Steelers don’t begin the preseason until Saturday, Aug. 13 against the Seattle Seahawks. Pickett figures to see a large chunk of the snaps in the second half of that game.

Kyle Shanahan might want to keep this info to himself next time. https://t.co/vLu2TU7uSn

For now, it appears he has a lot of work to do if he wants to move his way up the depth chart.