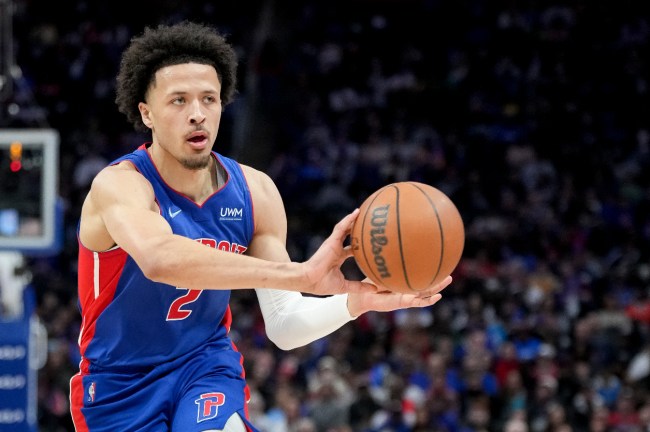 Only a few teams are left in the NBA season, and the Eastern Conference Finals feature the Boston Celtics and the Miami Heat. As always, celebrities and other NBA players make their way to the high-energy games. But, on Monday night, the Detroit Pistons had an attractive young trio on hand at TD Garden to take in Game 4 of the series.

2021 No. 1 overall pick Cade Cunningham made his way to Boston and was joined by Isaiah Stewart and Killian Hayes, all of whom are the focal point of a young, rebuilding team in Detroit.

Yes, it is normal for NBA players to partake in these games and watch the best of the best in high leverage situations.

However, the faces on the Pistons trio are hard to overlook, and perhaps they are trying to learn a thing or two about playing in the NBA Playoffs.

Neither of the three looked to be having a good time — at least not in that tweet above.

Was this a teaching moment for Cunningham and his teammates? Perhaps.

Oh they want to win. I love this. Experience the atmosphere to know what to expect. Great stuff by the young fellas.

The Pistons went just 23-59 this past season, so there is a lot to learn, and going to these games should only motivate the young players.

Oh, and it appears that their head coach, Dwayne Casey, was also in attendance.

Dwane Casey was there too, he probably wanted the young guys to see how playoff teams play or something like that

That’s pretty cool, and Casey knows a thing or two about playoff atmosphere games and might want to inject that feeling into his young trio.

Good times are coming in the Motor City, and the young trio with Cunningham at the helm is a massive reason.