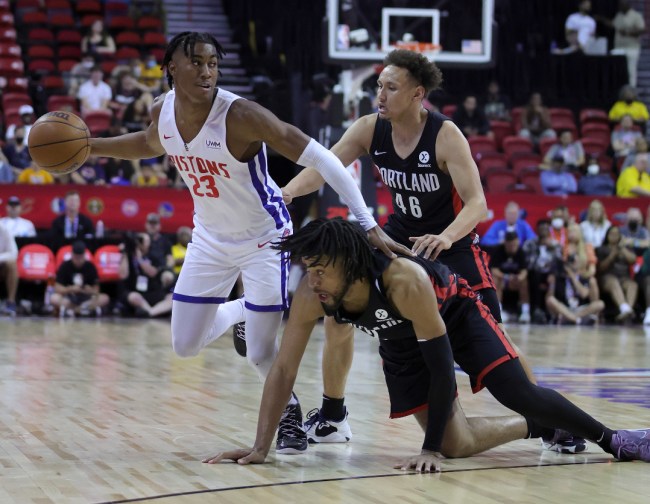 The Detroit Pistons are sure an exciting team to watch on the basketball court. The Pistons feature 2021 No. 1 overall pick Cade Cunningham and a pair of 2022 first-rounders in Jaden Ivey and Jalen Duren.

Well, Pistons fans got a live look at their new trio on Thursday night in the Las Vegas Summer League — for those who were awake, at least.

The Pistons faced the Portland Trail Blazers, and the game concluded just before midnight on the West Coast. Nonetheless, it was full of thrilling plays for their new core, and the Pistons won, 81-78.

Ivey, the No. 5 overall pick from Purdue, did just about everything. He finished with 20 points, six rebounds, six assists, and an entire reel of highlights.

No bucket but how did Jaden Ivey make this pass?! pic.twitter.com/hw4PKVtEBh

This change of speed by Jaden Ivey 🤯#NBA2K23SummerLeague Live Now on ESPN pic.twitter.com/WBCUXJVuuZ

Jaden Ivey splits a pair of defenders and finishes the acrobatic layup pic.twitter.com/l9b5faXIg2

Then there’s Duren, who the Pistons acquired via a draft-night trade with the New York Knicks — and indeed a thank you card is headed to Leon Rose’s office pretty soon.

Jalen Duren left the rim shaking after his throwdowns 😤 pic.twitter.com/65EG1dTFwz

Pistons fans are thrilled beyond all reason with this new trio, and Cunningham isn’t even on the court in Las Vegas. It also helps that the rookie connection immediately kicked off with an impressive alley-oop.

The @DetroitPistons rookies start the game with a 💥

The fans were waiting for this moment.

yeah, pistons basketball is about to be back. https://t.co/XGiodn0lT2

I love this duo already

This young duo has to be one of the most exciting in the entire NBA. Oh, and Cunningham added to this will make the Pistons even more enjoyable to watch.

This is just the first day. Who knows what will happen the rest of the time this duo is in Sin City. Stay tuned for more Jaden-Jalen highlights.