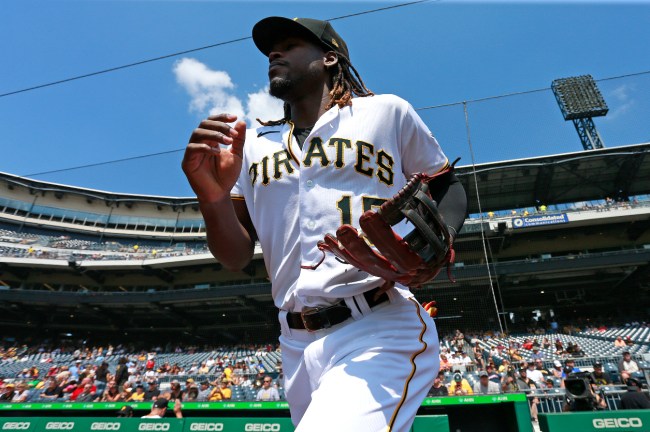 The Pittsburgh Pirates aren’t very much fun to watch. They have one of the worst records in the MLB with a 47-77 clip entering Wednesday.

They don’t have many star players, either. However, young shortstop Oneil Cruz has done plenty to make fans pumped up in his first year in the MLB.

Cruz continued this once again with a scorching base hit in Wednesday’s game against the Atlanta Braves.

That's the hardest hit ball of the Statcast era! pic.twitter.com/WuZchlYLko

Cruz ripped a base hit to right field and 122.4 MPH, which is a Statcast record.

It has been an up-and-down season for Cruz, although he’s made plenty of highlight plays in the field as well. With the bat, he came into the game hitting just .198 with 10 home runs and 30 RBIs.

Nonetheless, MLB fans everywhere are thrilled at what Cruz has done in the MLB and took notice of this scorching hit.

That’s gotta be the hardest single ever hit. https://t.co/R0GTjudTzd

He might be the 🐐 by the end of his career https://t.co/ySVYt6aZRH

Hopefully the Pirates can put a decent team around him and compete in the future. If not, it wouldn’t be surprising to see Oneil Cruz playing baseball somewhere else pretty soon. Still, this is his first season in the league and we can’t even imagine what happens in the following campaigns.

A team with 77 losses is usually not worth watching, but Cruz is one player everybody wants to see. Go Pirates!