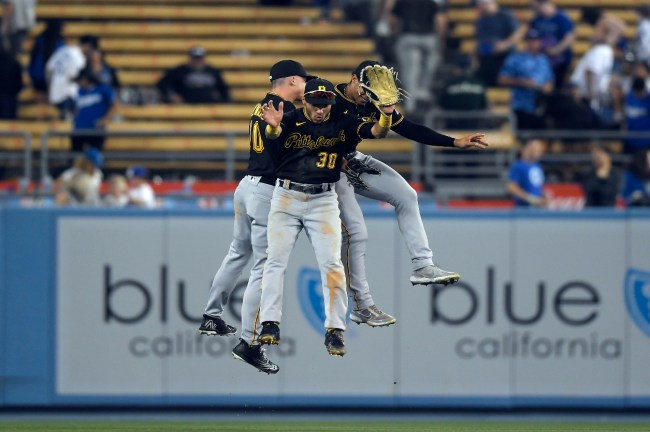 The Los Angeles Dodgers have one of the best records in the MLB at 33-17. The Pittsburgh Pirates are below .500 at 22-27. Keep in mind that both of those records are after a three-game series between the two sides.

Yet, the lowly Pirates with one of the smallest payrolls in baseball just swept the Dodgers in a three-game series and scored five or more runs in each game.

It was unpredictable, and yet the middle team in the NL Central defeated the team that many think are the favorites in the National League — and possibly the entire MLB.

After the series concluded, the Pirates made sure to add insult to injury, and the Dodgers were the recipients of it.

The Pirates’ social media team needs a raise for this, to be honest.

Heard all of the talkin', now it's quiet, now it's shush pic.twitter.com/qK2jdB32ex

Nobody expected the Pirates to walk into Los Angeles and win three straight games at Dodger Stadium. Yet, they did just that, and the Pirates’ Twitter post on Wednesday night was another gold mine.

Good night to the city of Loss Angeles. pic.twitter.com/9xFt5U9rfY

Whoever the social media coordinator is for the Pirates deserves a massive raise. The Pirates continue their NL West tour with a series against the Arizona Diamondbacks, and maybe their momentum will keep going.

The Dodgers will look to bounce back, although they have their hands full with a four-game series against the New York Mets, followed by the Chicago White Sox and San Francisco Giants after that. Who knows, maybe this sweep against the Pirates is the beginning of a long skid for the Dodgers.