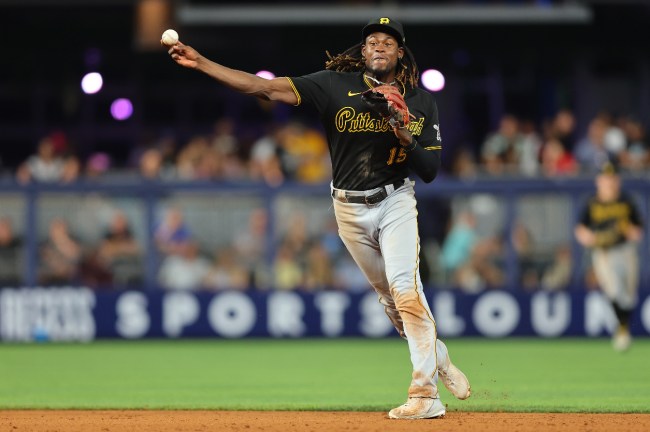 By now, everybody knows the name of the Pittsburgh Pirates’ young shortstop. Oneil Cruz, who hasn’t even been in the MLB for half a season, has become a must-watch.

Sure, his offensive numbers are disappointing. Through 22 games coming into Thursday, he has a .210 batting average with four home runs and 16 RBIs.

But his defense is what has everybody buzzing, and he made another unbelievable play on Thursday against the Miami Marlins.

It's the fastest throw by an MLB infielder during the Statcast era, which began in 2015 pic.twitter.com/PZihHJ4Hdu

Cruz just recorded the fastest throw by an infielder since Statcast began, and he made it look effortless.

The announcers were shocked. Everybody was left stunned, and Cruz even double-clutched a bit.

90 arm
scale usually goes to 80 but that's for humans 👽🛸 https://t.co/zcIWTVvrIl

That ball had a vapor trail, just insane https://t.co/5Sg8ifuQwK

Oneil Cruz has a certified CANNON at shortstop @Starting9
pic.twitter.com/OtyZAiJxv2

Earlier in the game, Cruz knocked out Miguel Rojas’s tooth when he slid into second base.

Miguel Rojas just got his tooth knocked out by Oneil Cruz.

Cruz is a star in the making, and if his offensive game picks up, he should be an All-Star for a long time in the MLB. But let’s not discredit the unreal stretch by first baseman Michael Chavis, either.

Sadly, the Marlins defeated the Pirates, 3-2, on a walk-off, two-run triple by Brian Anderson in the 11th inning. Still, this play by Cruz will be played for a long time, and there are plenty more plays like this up his sleeve.