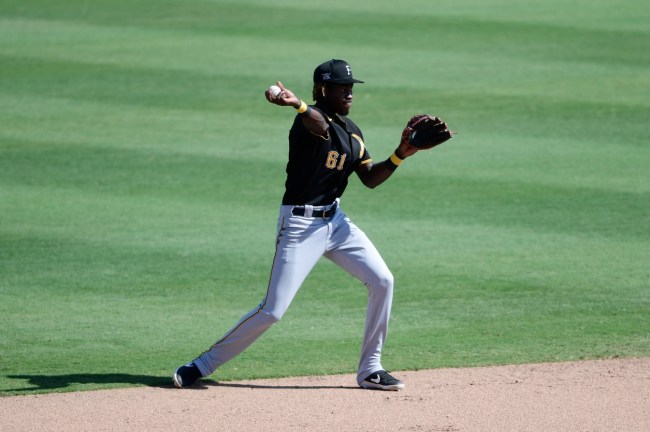 The Pittsburgh Pirates have not been an exciting baseball team to watch. They came into Monday’s game with a 26-39 record, but excitement was on the way after they called up young shortstop Oneil Cruz.

Cruz got the start against the Chicago Cubs, and it didn’t take him long to make headlines. In the third inning, Cruz threw out catcher Willson Contreras on an absolute rocket of a throw — it was clocked at an absurd 96.7 MPH.

So: ONeil Cruz has been back up for about 25 minutes. He's already got the hardest tracked throw by an infielder of the season (96.7). I think that's going to work. pic.twitter.com/0vOCbs6BVo

That’s right, Cruz rocketed this ball and nobody could believe it.

This Throw By Oneil Cruz Has Everybody Buzzing

Rightfully so, the throw by Cruz had everybody talking about the Pirates’ star shortstop.

Oneil Cruz is not a pitcher.

Wow what an arm

Cruz ended up adding a bases-clearing double in the bottom half of the inning, and Pirates fans are loving every second of this debut from the 6-foot-7 shortstop.

112.9 MPH off the bat of Oneil Cruz for his first hit of the season 😳 pic.twitter.com/XWM8ZIGrlK

It has been a tough year for Pittsburgh, but so far, through one-third of a game, Cruz has fans buzzing with excitement.

Keep in mind that this is the first game of the year for Cruz, and both of these events took place in just the third inning. The Oneil Cruz watch will be on for quite some time, and the Pirates might turn into must-watch television just because of this talented shortstop.