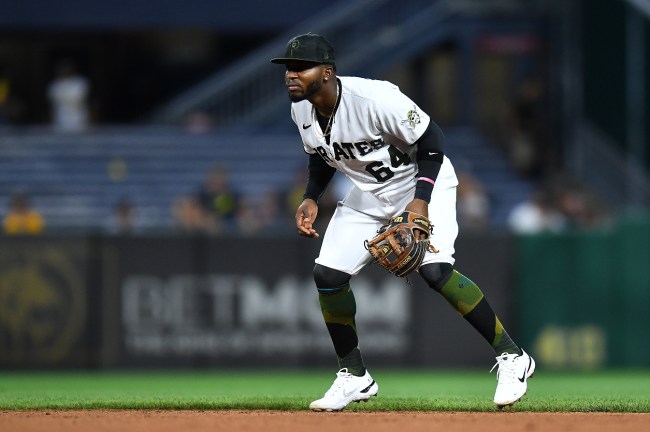 The Pittsburgh Pirates and Arizona Diamondbacks series is not an entertaining one. These are two of the worst teams in the National League, although young sensation Oneill Cruz is definitely worth watching.

Well, Tuesday’s game gave everybody an unbelievable, must-see moment. Pirates infielder Rodolfo Castro was running the basepaths and slid into third base.

He was safe, but somehow, his iPhone dropped out of his pocket and onto the dirt. Here’s the video.

This is a first… Rodolfo Castro's phone fell out of his pocket in the middle of the game 😅 pic.twitter.com/qaPd34qroF

Everybody here was confused, and the umpire’s reaction was priceless. Fans online flocked to Twitter and marveled at this never-before-seen event.

Why does Rodolfo Castro have a phone in his back pocket while running the bases??? I’ve never seen that before pic.twitter.com/H9Iy87A8j2

Why is he playing wit his phone on him tho lol https://t.co/0FatQ3oStv

Never know when you’re gonna have to tweet 🤣 https://t.co/kXv7D1yEKe

Gotta get credit for those steps on the Health app. https://t.co/3zGQmE3G3l

Gotta get those IG post off mid game!! https://t.co/3cWFPteBtI

Given this sport’s problems with cheating via electronics over the last decade or so this seems like the kind of thing that shouldn’t be allowed. https://t.co/PBn6ynI2qt

There are a ton of hilarious comments on Castro’s phone falling out of his pocket. Moreover, this has to be an issue the MLB looks into, right?

Is this even allowed?

This is a first, at least from what we have seen over the past decade or so. A phone falling out while he is sliding into third base?

The best part of it all, however, is that Rodolfo Castro didn’t even remember having his fun in his pocket. Here’s the entire explanation.

Rodolfo Castro's explanation of what happened with his phone at third base, via team interpreter Mike Gonzalez.

Derek Shelton pointed out that Castro always has his sliding pad/oven mitt, so he probably didn't know he had it. No intent on Castro's part to use his phone in-game. pic.twitter.com/6ujP28VCFG

There might be some punishment coming from the MLB, and a fine seems to be the most likely scenario. Nonetheless, this might be the first time we have ever seen somebody’s phone fall out of their pocket.