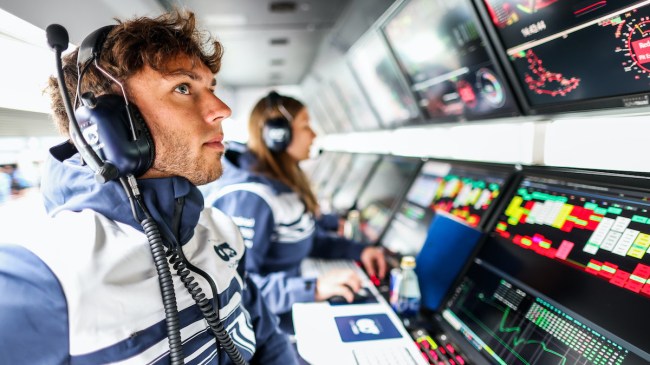 Despite continual rumors linking him to Alpine F1, AlphaTauri driver Pierre Gasly has insisted that he remains under contract with Red Bull’s sister brand—at least for now.

While Alpine currently awaits the Contract Recognition Board’s decision on Piastri to settle their dispute with McLaren, rumors have increasingly linked AlphaTauri’s Pierre Gasly to the French F1 team.

Gasly has largely avoided commenting on the matter, but fans thought he recently let some key details slip out. In a clip from SF Full Access, Ferrari’s behind-the-scenes YouTube series, Gasly is heard saying: “I’m still working on the final details of the contract.”

Fans assumed the comment was in reference to an Alpine contract, but Gasly has since clarified. He dismissed the rumor on Thursday, claiming his comment was actually unrelated to Formula One.

Gasly states that George Russell, who was walking alongside him and Charles Leclerc, was discussing something wedding-related. Russell seemingly says the word “married” right before Gasly’s comment in the clip, so the explanation checks out.

When asked further about the potential move to Alpine, the current AlphaTauri driver didn’t have anything new to say. He reiterated that AlphaTauri has him under contract through 2023, but did leave it open to change in the future.

“I said it last week, for next year currently, I’m contracted for AlphaTauri. Everybody is aware of my contract situation. For now, nothing has changed,” Gasly told Motorsport.com.

While Gasly has shut down the rumors linking him to Alpine, it appears Red Bull is open to letting him go for a price. If Alpine truly wants Gasly, they just need to provide a real offer.

Helmut Marko has confirmed that if there is a real offer from Alpine to Pierre Gasly, they will not stand in his way and would release Gasly from his contract.

Alpine would have to pay a fee if they want Gasly. #Alpine #F1 #Gasly #Formula1

However, Gasly isn’t the only driver that Alpine is rumored to be considering. Daniel Riccardo, who left then-named Renault in 2018, has stated his willingness to make a return. Current Alpine driver Esteban Ocon also named Mick Schumacher as his suggestion for the seat.

Alpine has yet to comment and is likely waiting for the CRB to conclude its hearing on Piastri first. If Alpine receives compensation as a result of the dispute, it could help contribute to the buyout fee for Gasly.

Eight races remain in the 2022 F1 season, so time is running out for Alpine to make decisions for 2023. In the meantime, all parties will be focused ahead on the Dutch Grand Prix this coming weekend.