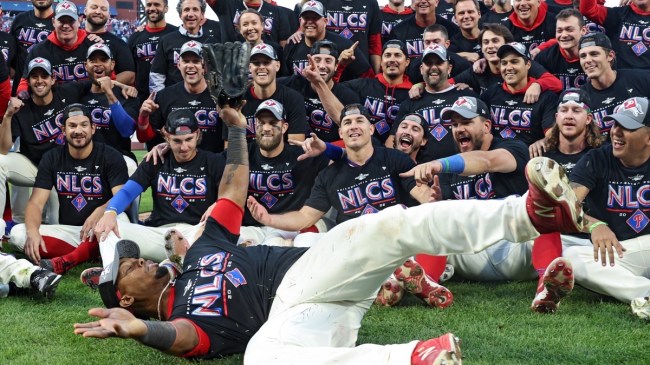 and teammates of the Philadelphia Phillies pose for a team photo after defeating the Atlanta Braves in game four of the National League Division Series at Citizens Bank Park on October 15, 2022 in Philadelphia, Pennsylvania. (Photo by Patrick Smith/Getty Images)

It was a strange regular season for the Philadelphia Phillies. They came in with huge expectations following the offseason acquisitions of Nick Castellanos and Kyle Schwarber, among others. But, they got out of the gate poorly and had to fire Joe Giradi early in the season. Things got better under interim manager Rob Thomson, despite fighting numerous injuries to Bryce Harper. They put themselves in position for a wild card berth and survived a late-season collapse.

They swept the St. Louis Cardinals 2 games to none in the wild card series and had a chance to take out the Braves in game four of the NLDS today at home. It did not disappoint the home fans.

The Phillies smacked the Braves and advanced to the NLCS

Behind strong hitting and excellent pitching from all six Phillies who pitched, the Fightins beat the braves 8-3 and won the series, 3-1. It’s the first NLCS for the team since their championship 2008 season.

The game was highlighted by a history-making inside-the-park-home run by JT Realmuto.

The Philies are now 5-1 in the playoffs this year and await the winner of the Dodgers and Padres in the NLCS.

It’s been a long time coming in Philadelphia. They hadn’t been to the playoffs since 2011, the 2nd-longest streak in baseball entering the year.

Fans were popping off in the ballpark and outside of it on Saturday.

Fans wanted to soak it in and many didn’t leave the ballpark.

What a tremendous atmosphere at Citizens Bank Park. This was about 10 minutes after the #Phillies game ended.

Only people who left were the Braves family section. pic.twitter.com/q7EgSeF75C

And, some players were seen celebrating at Philadelphia entertainment complex Xfinity live.

Bryce Harper and the Phillies are partying at Xfinity Live pic.twitter.com/2ktwNv4c3V

Eight more wins and the Phillies will have achieved one of the great turnaround stories of all time.