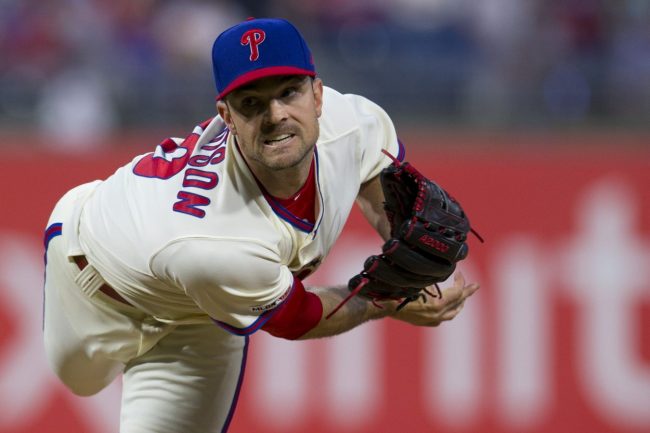 It’s been 10 years since the Philadelphia Phillies made the MLB playoffs and Philly fans are starving for a taste of postseason baseball. That streak is the second-longest in all of baseball behind the Seattle Mariners, who haven’t made the postseason in 20 years.

But that streak could be coming to an end this year. The Phillies currently sit at 55-47 and hold a one-game lead over the St. Louis Cardinals for the final National League wild card spot. Seattle also holds the final AL wild card spot, but we’ll save that story for a different day.

Phillies fans are ready for a winner and were calling for general manager Dave Dombrowski to be active on MLB trade deadline day Tuesday. By the time the deadline approached on Tuesday afternoon, Dombrowski was active. But he wasn’t active in the way that fans were hoping for.

The Phillies Do Some Wheelin’ And Dealin’

Ben Brown is going to Chicago in the David Robertson trade, sources said.

Phillies are trading Logan O'Hoppe to Angels for Brandon Marsh, sources said. @ByRobertMurray is on it.

Dombrowski made a pair of moves in the margins that cost the Phillies a pretty penny. The first saw catching prospect Logan O’Hoppe, who MLB.com ranks as the organization’s third-best prospect and a top-100 prospect in all of baseball, go to the Los Angeles Angels. In return, the Phillies landed Angels outfielder Brandon Marsh. Marsh is known for his plus speed and glove and is under team control until 2027. But he’s hitting just .226 in 292 at-bats this season.

Phillies: in addition to our top 3 pitching prospects, Ben Brown and Logan O'Hoppe also are not available

also Phillies: we have traded Logan O'Hoppe for trash

We could have used O’Hoppe as the piece for a legit starter. Instead we use him for a defensive CF who can’t hit?

In the second move, the Phillies acquired Chicago Cubs reliever David Robertson for Ben Brown. Brown began the year ranked No. 26 in the Phillies system but has since flown up the rankings after posting a 3.05 ERA and 12.9 strikeouts per nine in the minor leagues this season. Robertson, meanwhile, returns to the Philadephia after a rough first go-around with the team where he appeared just seven times despite signing a $23 million deal.

The veteran reliever has been lights out for the Cubs this year, posting a 2.23 ERA in 36 appearances. But Phillies fans were yet again unmoved.

Got to say with all the posturing around O'Hoppe and Brown, I thought they be involved for a SP, not a good rental RP and a young, scuffling CF.

Trading Ben Brown for a rental reliever is what happens when your front office decides to spend $6M on Jeurys Familia.

There was one move that seemed to unite Phillies fans in joy. The team designated outfielder Odubel Herrera for assignment in light of the Marsh trade. Herrera, who often struggles to track routine fly balls and swings at pitches between his legs, is most well-known for his domestic violence suspension in 2020.

WE WON THE TRADE DEADLINE https://t.co/NPCYvg2BuQ

Relief pitcher Jeurys Familia was also designated for assignment. Familia, like Herrera, has struggled on the field and has been suspended previously for domestic violence.

The Phillies have designated Jeurys Familia for assignment. They won’t play short tonight; Francisco Morales and Mickey Moniak are here.

See, it’s not all bad for Philadelphia fans.