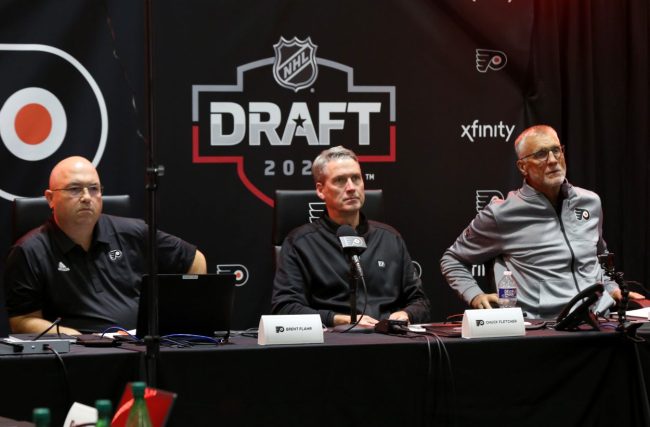 The Philadelphia Flyers are an abject disaster. The team is now 12 years removed from making the Stanley Cup Finals. In the time, since Philadelphia has won just three playoff series’ and won just one since 2013. The organization just had to unload franchise cornerstone Claude Giroux for little to nothing at the NHL trade deadline, and it’s only gotten worse.

In the face of one of their worst seasons in recent history, Flyers general manager Chuck Fletcher said the team would pursue an “aggressive retool” in the offseason. What exactly that meant, nobody knows. Philadelphia had very little cap room, middling draft assets and not much talent at the NHL or major league level.

Injuries have only made things worse. Superstar defenseman Ryan Ellis, who the team traded for just last season, played just four games in 2021-22 due to injury. Now there’s talk that he and his $6.25 million contract could miss the start of next season and well beyond. Rising star Joel Farabee just had major back surgery. First-line center Sean Couturier is also recovering from back surgery. Generally, the organization is stuck in purgatory.

The Flyers already had scant few draft picks. But Fletcher doubled down on that move when he traded for controversial defenseman Tony D’Angelo. Fletcher gave up a trio of draft picks to acquire the rights to D’Angelo, who was an impended restricted free agent. He then doubled down by giving him a two-year, $5 million deal. That locked $10 million of Philadelphia’s already precious cap space in D’Angelo and Rasmus Ristolainen, two of the worst defensemen in the league according to advanced metrics.

The lack of cap space also kept the Flyers from landing a superstar in free agency. Six-time NHL All-Star Johnny Gaudreau grew up less than an hour from Philadelphia and reportedly wanted to return after leaving the Calgary Flames in free agency.

But the Flyers don’t have the cap space to sign Gaudreau. Fletcher was reportedly hesitant to attach a draft pick to winger James van Riemsdyk in order to shed his $7 million cap hit.

Gaudreau is now reportedly choosing between a pair of Philadelphia’s rivals, the New York Islanders and New Jersey Devils.

LeBrun on TSN says Devils and Islanders are the contenders for Johnny Gaudreau.

To top it all off, Fletcher made a pair of extremely underwhelming moves to open up the free agency period.

So Justin Braun goes back to PHI to be the third pair defenseman (and possible first-pair guy if the Provorov-DeAngelo pairing doesn't work) and then they get a fighter in Deslauriers.

The boys are back 2gether pic.twitter.com/vv00jNz3D5

To nobody’s surprise, Philadelphia fans are losing their minds.

The Flyers are turning me into the Joker in real time, I cannot believe this

That is INSANE for a guy who is below replacement level and cant play above 4th line. #Flyers https://t.co/CCvRhF8PKY

Is Chuck Fletcher actually TRYING to ruin the Flyers and drive the whole franchise into the ground? Because that’s honestly what it feels like.

If Chuck Fletcher had told Ed Snider while he was still alive that he can’t find a way to sign a hometown kid who also happens to be a star he’d of thrown him off the roof of the Wells Fargo Center.

The superstar free agent was texting his friends he wanted to sign in Philadelphia and Chuck Fletcher still couldn’t get it down.

This is the most embarrassing day of the past decade…and there was a lot of them.

Chuck Fletcher has been pissing away draft picks for over three years now and decides to draw his line in the sand today.

If reports are true, Chuck Fletcher has absolutely zero credibility at all.

Philly fans, we love you and we are here for you.