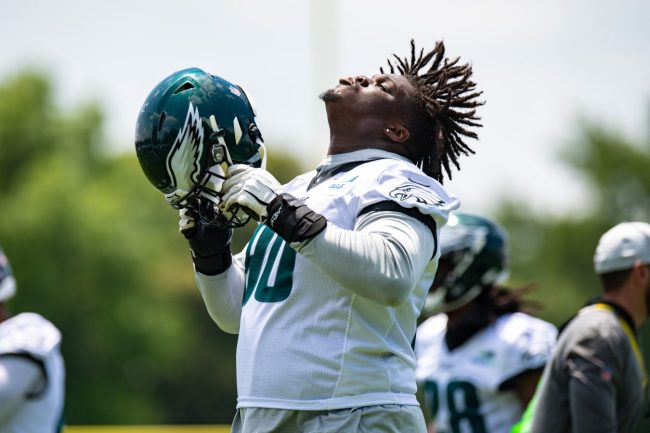 Jordan Davis was one of the most dominant players in all of college football in 2021. The University of Georgia nose tackle was an immovable object at the heart of a defense that led the Bulldogs to a national title.

Davis’ success didn’t go unnoticed. It helped earn him a spot in the first round of the 2022 NFL Draft where he was selected No. 13 overall by the Philadelphia Eagles.

At 6-foot-6, 340 pounds, Davis is a hard guy to miss. Even six-time pro bowl defensive tackle Fletcher Cox is taking note of his young teammate. In a recent interview, Cox mentioned just how impressed he was with Davis.

“It’s going to take Jordan some time to adjust to the way we practice, the way we fly around, and he’ll get there. We don’t expect him to get there in the next week, week or so, but we expect him to get there. He’s the guy. They drafted him in the first round and everybody’s excited for him, everybody wants to teach him — and he’s willing to learn, which is always a good part.”

Little did he know that Davis’ immense talent goes far beyond the field of play. It turns out, Davis is pretty impressive with a microphone in his hand as well. The Eagles hosted rookie karaoke as part of their training camp initiation process. Davis opted to go old school with Rick James’ Mary Jane. To the surprise of everyone in attendance, Davis absolutely crushed it.

So can he sing?

Check him out tonight at the Eagles rookie show!
Wait for it 😂
🎥 @Jay_MostWanted pic.twitter.com/GD7g4FTLbg

So to rehash, Jordan Davis is: very large, very athletic, and a very gifted singer. That’s a baaaaaad man right there.