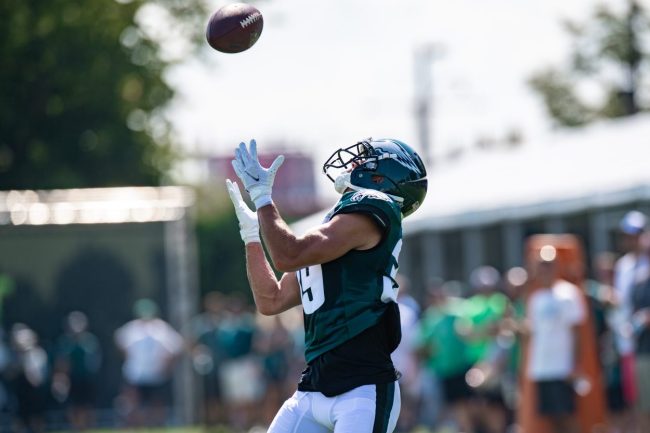 Philadelphia Eagles wide receiver Devon Allen may be one of the best athletes in the entire NFL. The 27-year-old has yet to actually play a game in the NFL, but the majority of fans already know his name.

That’s because Allen is a two-time national champion in the 110-meter hurdles and represented the US in both the 2016 Rio and 2021 Tokyo Olympics, where he took fifth and fourth respectively.

Allen reportedly showed off those hurdling skills at a recent joint practice between the Eagles and Cleveland Browns. And it didn’t sit particularly well with multiple Browns players.

During a special teams drill today, Eagles WR/Olympian Devon Allen knocked a player down and celebrated by hurdling over him.

All-Pro wide receiver A.J. Brown, who joined Philadelphia in a blockbuster trade with the Tennessee Titans, quickly came to his teammate’s defense with a pretty fair point.

Allen was an undrafted free agent and if he makes the team he figures to a feature as a special teams weapon for Philly. He was an elite return man in his time at the University of Oregon.

The Eagles and Brown seemed to enjoy the rest of the practice against Cleveland as well. Philadelphia Inquirer reporter Josh Tolentino stated that third-year QB Jalen Hurts impressed in the showing.

Wow. Jalen Hurts rolls to his *left*, looks up and throws across his body downfield to A.J. Brown. That was a very difficult throw, but Hurts saw a window and executed. Ronnie Harrison was in coverage.

That was one of the best plays and throws I’ve seen from Hurts over the past year watching him everyday in practice. Level of difficulty was insane but he went for it, and struck gold

Brown defended Hurts against criticism early in the offseason and it appears the two have formed a tight connection. The duo are an integral part of an Eagles offense that could become one of the best in the league. Though much of that will hinge on Hurts development.

If only we had know it was this simple. https://t.co/KTUwxmvRQL