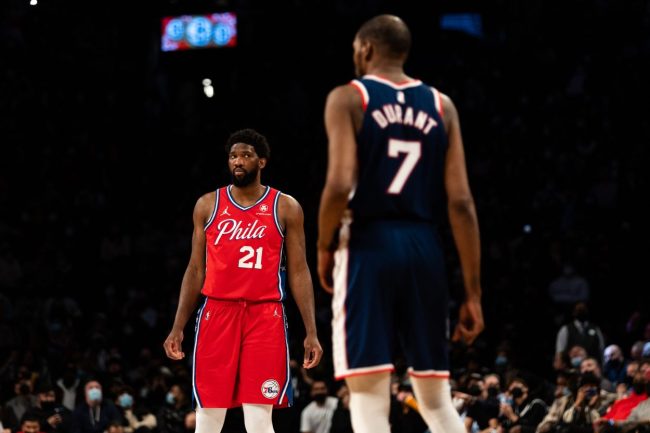 Kevin Durant has made his position clear to Brooklyn Nets owner Tsai. Either the team trades the superstar, or it cuts ties with head coach Steve Nash and general manager Sean Marks.

On Monday, Tsai made his position clear as well.

Our front office and coaching staff have my support. We will make decisions in the best interest of the Brooklyn Nets.

All signs appear pointed to one obvious ending: Durant will not be a member of the Nets when the 2022-23 NBA season begins in October.

Where Durant ends up is anyone guess. The Boston Celtics seem to be the latest favorite to land his services. Any trade between Boston and Brooklyn would reportedly center around All-Star Jaylen Brown. But Brown doesn’t seem overly enthused by that idea.

On Wednesday, a new team emerged into the fray. The Philadelphia 76ers.

A few notes on the Nets, Celtics, Kevin Durant, Marcus Smart and the Sixers' interest in Durant here: https://t.co/ZjkRII93Qx

According to Ian Begley of SportsNet New York, “as of earlier this week, there were high-ranking members of the Sixers who’ve felt strongly about engaging with Brooklyn on a Durant trade.”

Begley stated that a potential deal between the Sixers and Nets would likely surround emerging star guard Tyrese Maxey as well as Tobias Harris and Matisse Thybulle. Harris is entering the fourth year of a five-year max contract that expires following the 2023-24 season.

Durant was most recently seen with Philadelphia star and former Brooklyn teammate James Harden at a Travis Scott concert in London. The NBA is currently investigating the Sixers over potential rules violations surrounding Harden’s two-year, $68 million deal he signed with the team last month.

This Jordan 11 inspired paint scheme is so, so sick. https://t.co/7eyRSHVuaH

Adding Durant would give the Sixers the most formidable trio of stars in the league and likely shoot them to the top of the list favorites to win the 2023 NBA Championship.