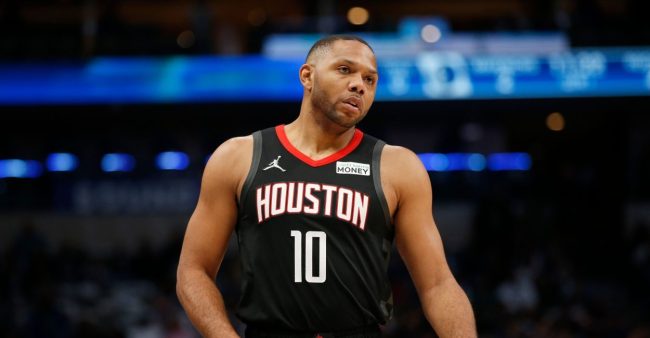 Morey traded Sixers starter Danny Green, as well as the team’s first-round pick in that night’s draft, to the Memphis Grizzlies. In return, Philadelphia received 24-year-old Grizzlies guard De’Anthony Melton. The move allowed Philly to acquire the defense and shooting that it coveted while also shedding Green’s salary.

But apparently that wasn’t the only move Morey attempted to make,.

The Sixers had long been tied to Houston Rockets veteran guard Eric Gordon. According to Kelly Iko of The Athletic, that deal almost came to fruition.

REPORT: The 76ers were “close” to trading for Eric Gordon on draft night, but talks fell apart.

Multiple teams reportedly offered the Rockets a 1st-round pick, but they were turned down.

Iko’s report says that a deal between the 76ers and the Rockets was close, but ultimately fell apart. The report also states that Philly wasn’t the only team trying to acquire Gordon’s services. Per Iko, no less than six teams called Houston offering packages which included first round picks. Of those six teams, the Miami Heat, Milwaukee Bucks and Phoenix Suns were included. The Rockets turned down each of the offers.

Iko went on to say that the Sixers called Houston again about the trade when free agency began, but that the Rockets are in no hurry to get rid of the former NBA Sixth Man of the Year.

“Given the ho-hum nature of this summer’s free-agent dealings, there’s a possibility that a team that strikes out in free agency circles back with an improved offer for Gordon. Houston may re-evaluate offers around the upcoming trade deadline, but assuming no team presents an offer deemed acceptable before then, the Rockets are more than pleased to have him on the roster heading into camp and the regular season.”

Daryl Morey, as always, is wheelin’ and dealin’.