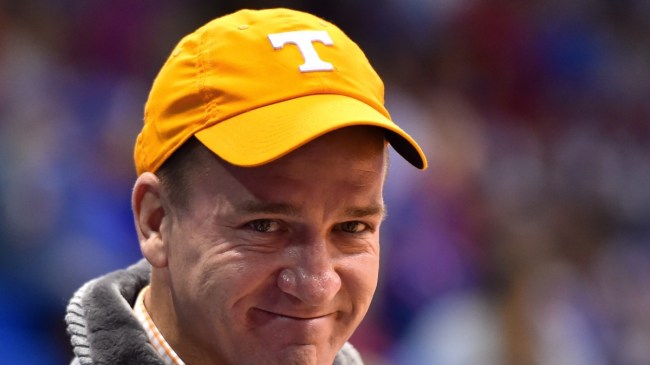 Peyton Manning is a Tennessee legend. The former Vol threw for over 11,000 yards and 89 touchdowns in his four years at Tennessee, finishing 2nd in the 1997 Heisman race behind Charles Woodson. Of course, the year after Manning graduated, the Vols won the national title. Nonetheless, he is a legend in Knoxville.

This weekend, College Gameday is headed to Knoxville for the massive Alabama-Tennessee game pitting the 2nd and 6th-ranked teams in the country against each other. It’s the biggest game in Tennessee football in over a decade. So, ESPN had to call in the big gun.

Peyton Manning will be the guest picker on College Gameday

With such a big game, you knew ESPN would go with Peyton Manning.

Peyton Manning will be joining us in Knoxville Saturday as the guest picker 🙌🟠 pic.twitter.com/HJaGhsypiS

Of course, the Manning family and ESPN are seemingly glued at the hip these days. There’s the Manningcast on Monday Night Football featuring Peyton and brother Eli for a select number of Monday night games.. And, Peyton has a show on ESPN+, Peyton’s Places.

But, it’s not all well and good among Volunteer fans.

Tennessee fans are talking about the Peyton Manning curse

Apparently, the Volunteers have not been good when Manning has been in the house to watch his alma mater and it has some fans freaking out.

I’m a big fan of the “Sheriff” but it is a scientific fact that Peyton Manning in attendance is a curse. Sorta like that creepy necklace the Brady Bunch found in Hawaii. pic.twitter.com/gzncSEHHqv

OF course, such a curse is nonsense. Manning shows up for big games, and Tennessee hasn’t been very good, so they’ve been losing the big games lately. I’m sure if he showed up when the Volunteers play UT-Martin or UT-Chatanooga, there would be no curse.

Our fan base really sucks sometimes. Peyton Manning is everything you could ask for in an ambassador to your school. Yet we actually have fans that don't want him at our games or as the face of our program because of an effing curse?! Lmao. This is beyond ridiculous.

I'm so tired of Tennessee fans talking about the Peyton Manning curse. The real curse was the string of dumbass coaches we had for 15 years.

That being said, if Tennessee loses on Saturday, I’m sure Vol Twitter will be blaming the Manning curse.