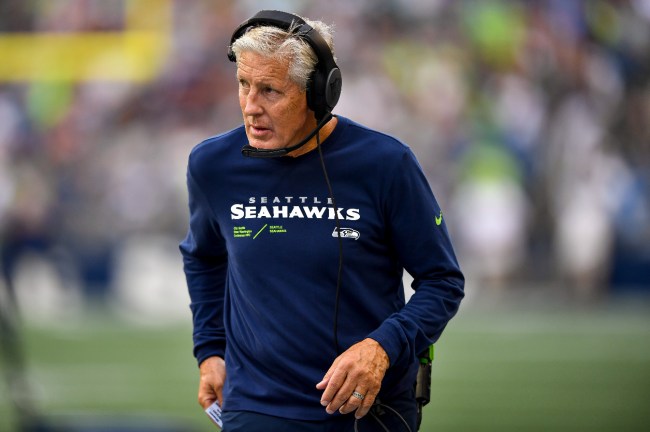 The Seattle Seahawks are heavily entrenched in a quarterback battle as Geno Smith and Drew Lock battle it out for the starting QB spot.

Yet, during practice, head coach Pete Carroll got everybody excited by throwing some passes at practice recently. Even at the age of 70 ( he turns 71 in September), Carroll is getting extra work in.

“How much you wanna make a bet I can throw a football over them mountains?”pic.twitter.com/rQOFSS4Mdi

The longtime head coach always finds a way to get his team excited, and he seemed to loosen up practice by getting under center and throwing some passes.

Of course, fans saw this as an opportunity to pile on the troubling QB scenario in Seattle. Both Lock and Smith were targets of the jokes.

Desperate for a QB, the Seahawks turn to Pete Carroll as player/coach as the season looms: https://t.co/8ojTqVc2mp

Things are getting desperate in Seattle https://t.co/FFUhovWPeV

Sources say Pete Carroll has named himself as starting quarterback for week one against the Broncos. https://t.co/3xMowZsHFn

For years, the Seahawks had Russell Wilson as the starter. But, this offseason, they traded Wilson away to the Denver Broncos for a haul, including Lock and picks.

The new era is here, and we still have no idea whether it will be Lock or Smith suiting up as the Seahawks’ starting QB in a couple of weeks on Monday Night Football.

Oh, the season opener comes AGAINST the Denver Broncos and former QB Russell Wilson, which is another eye-opening Week 1 game by the NFL schedule makers.