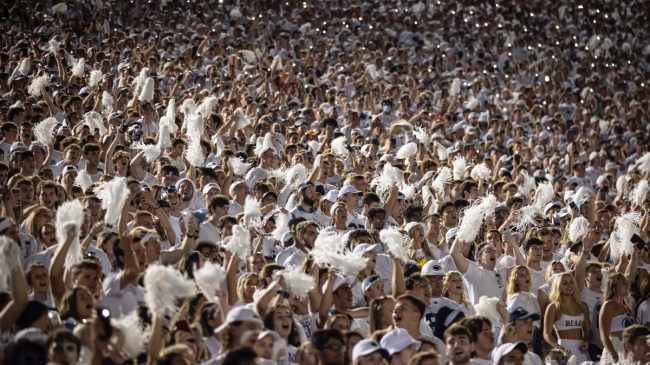 Penn State is home to one of the best atmospheres in all of college football. Fields and fields of tailgaters are filled with the 106,000+ that pack Beaver Stadium each home Saturday. Naturally, there’s a lot of drinking taking place outside of the stadium, as there is at all Big Ten schools on gameday.

One thing you’ve never been able to do at Beaver Stadium as a normal fan was to buy alcohol inside the iron gates. That privilege was only recently extended to those in suites, but never to the general population suffering on the stadium’s 40 year-old metal bleachers. That is no longer.

Around 24 hours before their week four clash with Central Michigan, Penn State’s Board of Trustees approved the sale of alcohol at games.

JUST IN: The Penn State Board of Trustees approved the sale of alcohol at Beaver Stadium during its meeting on Friday.

It’s currently unclear when the sale of alcohol will begin.

This comes as welcome news to me and my fellow Penn Staters. It stunk going to other stadiums and being able to have a cold one but not at our own stadium.

There are concerns that it could cause fan incidents. But, it doesn’t seem to have increased those incidents at Penn State’s peer institutions. And, it’s a huge moneymaker in an era where every dollar counts in college football’s arms race.

As you can see, this is a pretty involved endeavor.

Penn State's plan to sell alcohol at Beaver Stadium (expected to pass this afternoon) will involve hiring more than 300 new employees for oversight and "8-10 managers from around the country to support the
operation." pic.twitter.com/RuTr3vTiLW

Of course, it is the internet, so people will never naturally agree.
This tweet sums it up the best. There are definite positives to the idea and probably some negatives, too.

I’m not sure this person has ever been to a Penn State football game before. It’s not like people weren’t puking in the stands before.

I can already imagine someone puking in the stands cause of this 🙃 https://t.co/bdEjRXLQ4h

I agree with Mr. Brungo. I think this will be a great thing and will discourage people from loading up on liquor right before they enter the stadium and actually lessen alcohol-related incidents.

If done safely, this could be a great thing. https://t.co/yQT5G3xxQE

It is unclear when the first game that alcohol will be sold at will be this season.