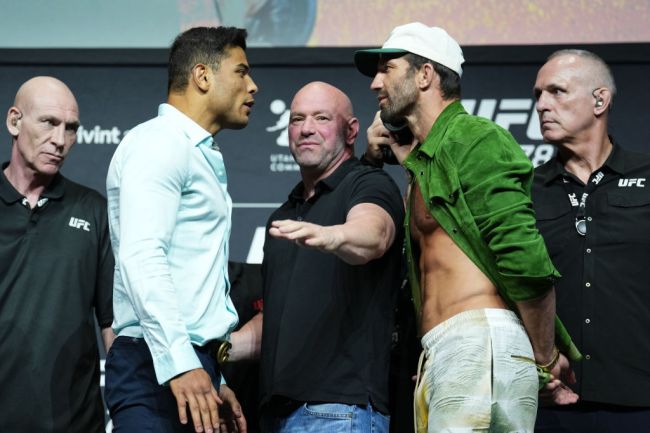 UFC middleweights Paulo Costa and Luke Rockhold haven’t had much nice to say about each other ahead of their matchup at UFC 278. Following Friday’s weigh-in, the two fighters exchanged more jabs and this time it was over steroid use.

The UFC 278 official weigh-in saw both Costa and Rockhold make weight, but it wasn’t without controversy. Costa blasted the U.S. Anti-Doping Agency (USADA) for taking his blood while he was still cutting early Friday morning.

According to Costa, a USADA agent had shown up at his door bright and early at 6 AM. The Brazilian, who was in the final hours of his weight cut and extremely dehydrated, didn’t appreciate the visit. He let his frustrations be known by calling out the UFC’s drug testing partner with an expletive-filled statement via Twitter.

Fuck the the boss on Usada who sent their agents this morning at my sleep room 6 am to take my blood out!!! I was cutting weight very dehydrated and they wants took my blood ! Fuck those guys!!! I never been caught by usada test I don’t need this fuck shit pic.twitter.com/dtFJQ61ezW

All UFC fighters are subject to random drug testing at any moment in the day. But what upset Costa is how inconvenient USADA’s timing was on Friday morning. Shortly thereafter, the Brazilian weighed in at 185.5 lbs and gave a quick “F*ck USADA” after stepping off the scale.

Rockhold saw it as an opportunity to throw more shade in his opponents’ direction and called out Costa’s statement via Instagram. In particular, he nitpicked the way Costa worded his claim of never getting caught by USADA.

While Costa was suspended in 2017 for IV use, he’s never failed a drug test from USADA. So obviously, he wasn’t a fan of the accusations and fired back.

Is accusing me of using steroids your best excuse for get knocked out cold ? sorry but it's not enough 👋👍🫵 pic.twitter.com/NNcQd2ahet

Paulo Costa and Luke Rockhold will get to settle their differences in the UFC 278 co-main event this Saturday. After all this back and forth, it’s shaping up to be an exciting night.