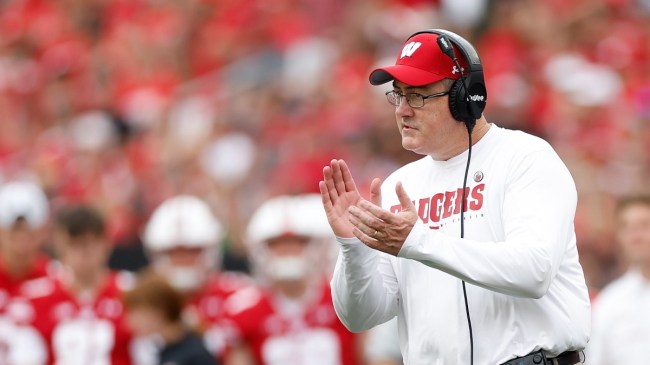 Wisconsin Coach Paul Chryst had one of the most secure jobs in America not too long ago. The Badger alum won double-digit games in four of his first five seasons in Madison.

But, he’s worn out some of that welcome as the Badgers haven’t won ten games since 2019 and have dropped to 2-2 this year. They’ve suffered bad losses to Washington State at home and then a blowout loss in the Horseshoe to Ohio State. It’s not up to the standards of Badger fans.

Wisconsin fans are fed up with Chryst

The Badger faithful are fed up with the subpar results. Many of them think Wisconsin should be winning the Big Ten West, which is much weaker than the East. But, that’s not the level the program has been playing at the last few years.

Wisconsin board wants them to be done with Paul Chryst and make a play for Kansas Lance Leipold who was a GA at Wisconsin. He knows the region from when he coached at Wisconsin-Whitewater.

I would argue that Wisconsin has been better than mediocre, but this fan disagrees.

The Paul Chryst Era of Badgers football has been & will always be the definition of mediocrity.

You know EXACTLY what you’re getting going into a game like this, and it’s usually not pretty. 🤷🏼‍♂️

The common choice to replace Chryst among Badger fans is defensive coordinator Jim Leonhard. The former NFL safety and Badger alum is thought of as one of the best in the country.

If I’m Wisconsin I’m firing Paul Chryst and making Jim Leonhard head coach. Chryst is supposed to be an offensive guy and they’re vanilla on that side and QB play is always mids

I’m not sure how hot Chryst’s seat is in actuality, but Badger Fans sure want it to be.