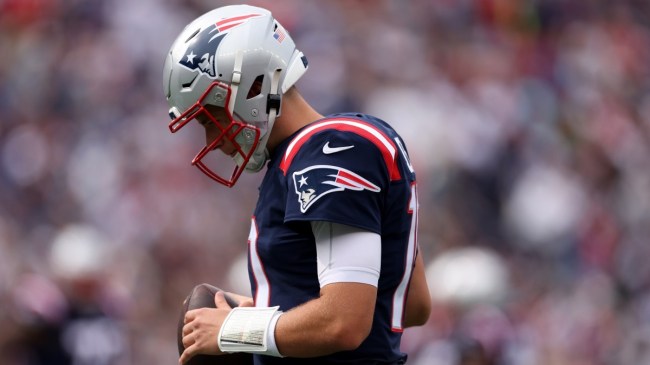 It’s been a suboptimal start for the New England Patriots. Bill Belichick’s men are 1-2 with the lone win coming against a bad Steelers team. They’ve been blown out by The Dolphins and Ravens. Both sides of the ball have looked terrible at times, and it seems to be the first mediocre Patriots team in 20 years.

One thing they could not afford was having 2nd-year quarterback Mac Jones go down. But, in Sunday’s loss to the Ravens, Mac Jones was seen limping late in the game. New England fans hoped for the best, but, it seems like they’re not going to get that.

Mac Jones could miss significant time for the Patriots

Patriots’ QB Mac Jones has what doctors diagnosed as a severe high ankle sprain that would cause many to have surgery, per sources. He is likely to miss multiple games. Jones and the Patriots still are discussing his options and the best way to proceed.

This is quite the death blow for New England. They’ll have to turn to either veteran Brian Hoyer or the rookie out of Western Kentucky, Bailey Zappe. This is certainly not what they needed.

It seems that New England and Jones disagree on the best course for action.

The Patriots and Mac Jones are at a disagreement about how to move forward.
Patriots want to get him back as soon as possible and he’s hesitant to their guidance and wants to proceed with caution. 2nd opinion.
Pats timeline is 4 weeks max, he’s comfortable waiting 6-8 if needed. https://t.co/XFeIm07q1t

This is big news

With news this big to one of the NFL’s signature franchises, lots of people have reactions.

Anyone but Christian Barmore & the offensive line is on the table at the trade deadline https://t.co/LJ5RidC0sV

The options behind him simply aren’t good.

I’d rather have Mac Jones out there on one foot than Brian Hoyer https://t.co/WMBG7UvsX5

This is probably the correct take. New England simply didn’t have the horses to make a run this year.

If we’re being honest, and not fanboys, the team wasn’t making the playoffs this season with or without Mac Jones. So, let him heal properly and completely.

This is a situation worth monitoring in the days and weeks to come.