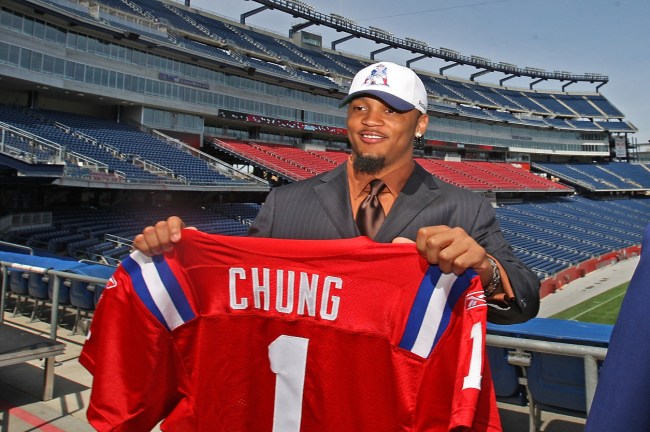 The New England Patriots are going back, way, way back. On Wednesday, the Patriots revealed their red throwback uniforms with a brilliant Back to the Future video.

Wait a minute, Doc. Are you telling me the red uniforms are back? pic.twitter.com/X1pd6kpdpG

This is absolutely well done by the social team and the players involved in this video, which look to be Matthew Slater, Kendrick Bourne, and David Andrews.

This is all because of the NFL’s rule to allow a different helmet to be worn, a rule that was put into place back in 2013 (h/t Alexandra Francisco of Patriots.com).

But to the disappointment of many, a 2013 rule change imposed by the NFL to improve player safety mandated that every club stick to one helmet.

Well, they are back!

The Patriots’ New Red Uniforms Are A Smashing Success

This goes without saying, but these uniforms are a smashing hit for fans everywhere.

Patriots confirm that Pat Patriot and the throwback uniforms are coming back this fall. About time https://t.co/dovTZXM66Q

THE. BEST. UNIFORMS. IN. SPORTS.

Everything about this is incredible. https://t.co/DvzBNKS1wD

It’s hard to find anybody that doesn’t like these uniforms. The Patriots didn’t mention how many times they will be wearing these uniforms, but everybody is hoping that other NFL teams will also switch back to their throwbacks.

Of course, New England’s social team deserves a ton of appreciation for this magnificent clip.

Even in the midst of the NFL offseason, excitement is brewing in Foxborough.