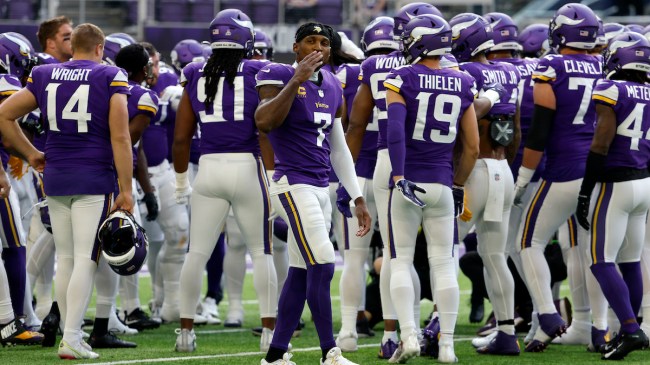 The Minnesota Vikings defeated Arizona Cardinals on Sunday with the help of two Kyler Murray interceptions and CB Patrick Peterson didn’t hold back in throwing jabs at his former teammate.

The Cardinals trailed by 4-points in the 3rd quarter when the Vikings picked off Murray for the first time of the day. It prompted a massive celebration from the defense with players posing for the cameras in the endzone, but it was Peterson who stole the show.

The former longtime Cardinals cornerback threw some clear shade at Murray not once but twice with his celebrations. There’s a lot going on in the clip below, but pay attention to the left side for #7.

Initially, Peterson pretends to put on a headset and play with a controller in a clear dig at the Cardinals QB and his infamous off-field passion for gaming. The hobby made recent headlines due to controversy surrounding an independent study clause in Murray’s contract extension.

Then in August, a statistical analysis from Reddit indicated a correlation between Call of Duty promotional weekends and a decline in Murray’s performance.

With the newest title, Call of Duty: Modern Warfare 2, released this past week, it was a particularly fitting celebration. But Peterson took it even further by mimicking Murray’s signature Baby Yoda pose as well.

The Vikings cornerback was asked about the celebration following the game and he kept the jokes coming. Despite claiming he’s not much of a gamer, Peterson was very much aware of Call of Duty’s recent release.

I asked Patrick Peterson what game he was pretending to play with his video-game celebration: “I think it’s called Call of Duty? I’m not much of a gamer. Heard it just came out.”

The Vikings would intercept Murray again in the 4th quarter and close out the game 34-26. They moved to 6-1 on the season with a firm hold of the NFC North.

Murray and the Cardinals fell to 3-5 with the loss. While playoffs aren’t out of the picture yet, they’ll need to bounce back in Week 9 against the Seattle Seahawks. However, now that the new Call of Duty is out, the outlook may not be too promising.