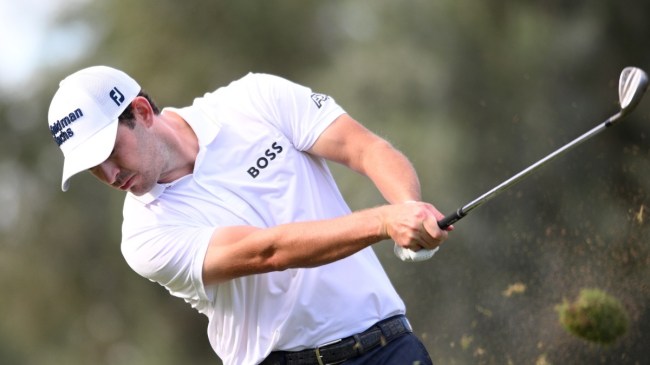 Getty Image / LAS VEGAS, NEVADA - OCTOBER 09: Patrick Cantlay plays his shot from the 12th tee during the final round of the Shriners Children's Open at TPC Summerlin on October 09, 2022 in Las Vegas, Nevada. (Photo by Orlando Ramirez/Getty Images)

Patrick Cantlay is one of the best golfers in the world. The former UCLA is the third-ranked player in the world and is a contender at plenty of majors. His game is as good as anyone’s and the 30-year-old will surely soon get his major championship breakthrough.

Of course, most of the tournaments the pros play aren’t major championships. This weekend was the Shriners Children’s Open at TPC Summerlin just outside of Las Vegas.

Patrick Cantlay shot 60 on Saturday, only to blow it on the final hole on Sunday

Cantlay shot back-to-back 67s on the par 71 course to open up the tournament, a good start but not among the top leaders. But, he lit it up in Saturday’s 3rd round. He shot a bogey-free 60 with eleven birdies and had a putt at the all-important 59 on the 18th on Saturday. This tied him for the lead with South Korean Tom Kim, and he kept pace with Kim all day Sunday. They headed to the 18th tee tied at -24 for the tournament and -5 for the day.

That’s when disaster struck. Cantlay drove his tee shot into a rocky area with some bushes to the left. But, he thought he could punch out and have a short iron into the 443-yard hole to try to save par. Unfortunately for him, that is not what happened and his ball ended up in an even worse position. So, he took a drop, and disaster struck again when he hit his fourth shot short into the water.

A triple bogey on the 72nd hole for Patrick Cantlay to lose by 3.

Naturally, he got up and down after the drop for his triple-bogey 7 and a share of 2nd, canning a 36-footer to do so.

It was the longest putt made all week.

Patrick Cantlay's 35-foot putt for triple bogey at 18 was the longest he made all week. Golf.

But, I can’t feel too bad for Cantlay. He took home a cool $712,000 for his T2 finish alongside Matthew Nesmith. That’s not a bad consolation prize.