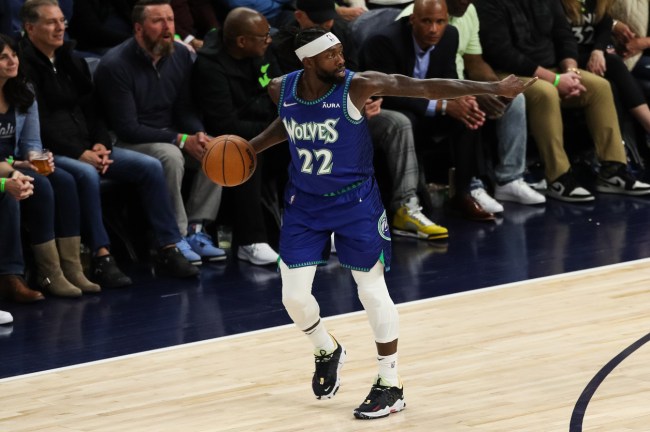 Prior to Game 5 of the NBA Finals, Fake Klay snuck into the entrance at Chase Center and even proceeded to take some shots on the court before finally being escorted out by security.

Here’s the video he released.

Fake Klay (@BigDawsTv) was banned from the Chase Center before game 5.

Here’s what got him banned. pic.twitter.com/SyOibJdkPd

What a hilarious sequence, and it is unfortunate that he won’t be allowed at the Chase Center for some time — until the Warriors lift the ban.

Well, Fake Klay continues to get a chorus of shoutouts, this time from Minnesota Timberwolves guard Patrick Beverley.

Ayo Fake Klay when the Timberwolves play Golden State next season, we need you on the Floor at Target Center gang🙏🏾🏀🤦🏾‍♂️🐐

So, Gurley won’t be allowed to attend home games for the Warriors, and that’s simply too bad. He was a joy to see and bore an uncanny resemblance to Thompson.

However, Beverley is welcoming him with open arms next season when the Warriors come to town, and hopefully he ends up taking Beverley up on that offer.

We all need to see Fake Klay and real Klay together one more time, at least.