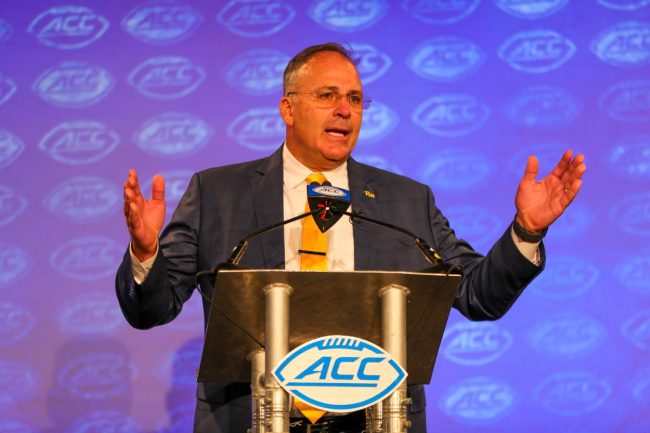 Pat Narduzzi apparently doesn’t know when to stop when he’s behind. The Pittsburgh Panthers football coach made headlines on Wednesday night when he threw former offensive coordinator Mark Whipple under the bus.

Now he’s back behind a microphone and making some pretty backhanded comments about a former player.

Whipple, who has since left for the Nebraska Cornhuskers in the same role, helped lead one of the nation’s top scoring offenses and helped turned Kenny Pickett into a first-round NFL Draft pick and Heisman finalists.

Another reason Whipple, Pickett and Narduzzi were so successful in 2021 was Jordan Addison. Addison was a sophomore wide receiver for the Panthers and had a breakout season, winning the Biletnikoff Award as the nation’s top wide receiver.

Addison, like Whipple, left Pitt and Narduzzi in the offseason. The star wideout transferred to USC, where he figures to be a top target for Heisman hopeful QB Caleb Williams. Rumors have circulated recently that Addison is unhappy at USC, and Narduzzi seems to be taking some joy in that.

He had this to say while speaking about Addison at ACC Media Day on Thursday.

"I think sometimes people forget how they got where they are."

“I’m focused on our guys that want to be here at Pitt,” he said. “And that’s going to be the key. Jordan’s a great kid, great player. We had fun with him for two years. I think we helped him get where he is today. I think we helped him win a Biletnikoff and be the player that he is, I think Kenny Pickett was pretty good. He had one of the best quarterbacks in the country throwing the ball everyday. I think sometimes people forget how they got where they are. It was a special year. Got a ton of respect for Jordan but young men gotta make decisions based on what they know or what they thought and we kind of move on.”

Narduzzi sure seems to think a lot of Pitt’s passing game for someone so upset with how much Mark Whipple threw the ball.  He also doesn’t seem to have a lot of faith in Addison’s decision-making ability.

The 2021 season was by far Narduzzi’s best as head coach. Now it’ll be interesting to see if he can duplicate the success going forward without those who helped him get there.