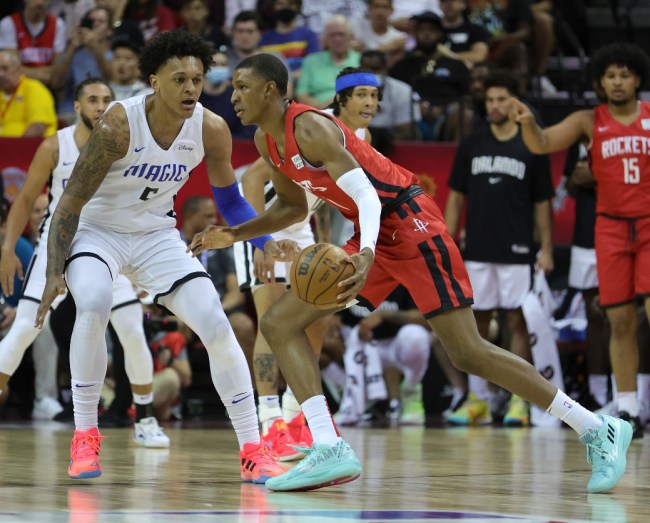 The Las Vegas Summer League is always a terrific time. What makes it even better is the matchups between high draft picks.

On Thursday, the Houston Rockets and Orlando Magic faced off against each other. The Magic have No. 1 overall pick Paolo Banchero, which was a draft night stunner. The Rockets have Auburn standout Jabari Smith Jr., who everybody expected to go No. 1 even that very day.

Nonetheless, the two high-profile rookies battled against one another in their debuts in the Las Vegas Summer League, and it was a must-watch game of basketball.

Paolo Banchero Gets The Best Of Jabari Smith Jr. This Time Around

Banchero walked away with the better statline, although both players performed well. Banchero led the Magic to a 91-77 victory, finishing with 17 points and six assists on 5-12 from the field. Smith chipped in 10 points and seven rebounds for the Rockets on just 10 shots, but both players showed their worth.

But Smith should have been more involved, and he will be once the Rockets figure things out.

All in all, both players made their teams proud, and you can clearly see why these guys were the cream of the crop of the draft class (Chet Holmgren already drew rave reviews in his Summer League Debut).

Unfortunately, Houston and Orlando aren’t scheduled to play each other again in the Summer League, so we might not see Paolo Banchero against Jabari Smith Jr. again. Well, not until the NBA season, that is.