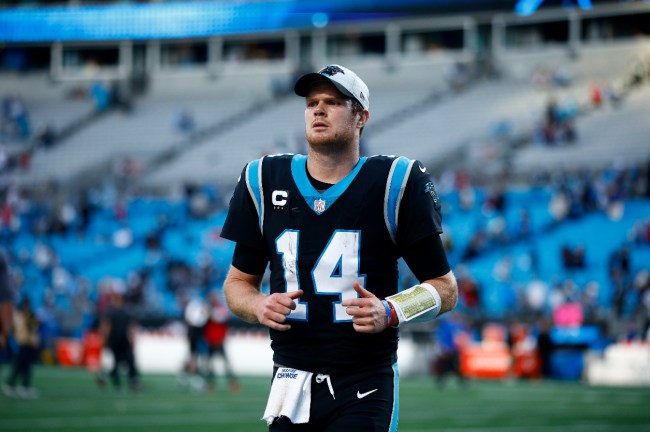 The Carolina Panthers might have no choice but to roll out Sam Darnold as the starter in 2022. He will earn just under $19 million in base salary this year.

The Panthers drafted Matt Corral in the third round of the 2022 NFL Draft and were rumored to be potential suitors for Jimmy Garoppolo and Baker Mayfield in the trade market.

Nonetheless, it is Darnold season for now, and the former USC Trojans star QB expressed overflowing confidence about his ability:

Sam Darnold says he's "confident I can be one of the best quarterbacks in the league.'' Improving footwork is something he has to improve. “There were times last year when my feet got very … just loose is a good term . . . chaotic.’’

Of course, Darnold will say that, and he has to know the pressure is on more now than ever before in the NFL.

However, NFL fans definitely don’t agree with Darnold one bit.

Does Darnold have talent? Obviously. Why else would the New York Jets take him at No. 3 overall back in the 2018 NFL Draft?

The problem is, it hasn’t translated to the NFL. In his first year with the Panthers, he got off to a hot start and led Carolina to a shocking 3-0 record, and he flashed his ability with his arm and his legs.

But, things went south quickly, and the Panthers ended the year at 5-12, and Darnold went five straight games without a touchdown pass.

So, the fans have every right not to believe Darnold’s statement, and others joked about Darnold maybe being the best QB in another league.

wish i was this unaware of my lack of talent https://t.co/PzlZsRcID7

Is that league the XFL?

Darnold, at least, is expressing confidence with the NFL preseason approaching sooner than everybody thinks. Plus, the pressure is on with Corral lurking and the ongoing, neverending Garoppolo and Mayfield rumors.

Maybe Darnold will flip the switch and shock the entire football world.