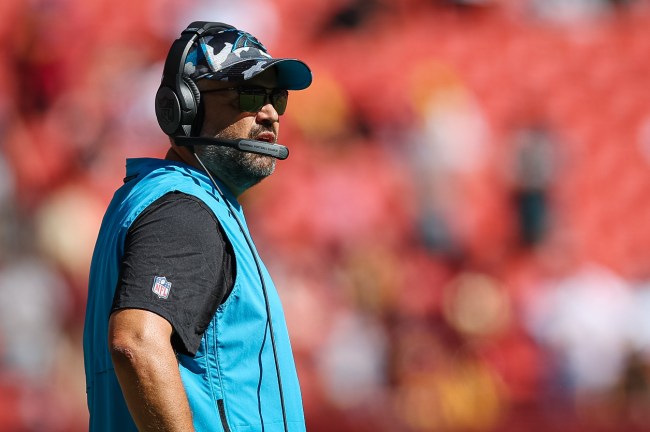 The Carolina Panthers have named Baker Mayfield as the starting quarterback for the 2022 season. Mayfield will begin his Panthers career in Week 1 against the Cleveland Browns.

Sam Darnold was competing, but once the Panthers acquired Mayfield, all signs pointed to him being the starter. Now, the Panthers are going to play their second preseason game against the New England Patriots, and neither one of Darnold nor Mayfield will be on the field for it.

Instead, it will be Matt Corral and PJ Walker splitting time.

PJ Walker and Matt Corral to alternate quarters against Patriotshttps://t.co/qH5rGTW73O

Walker will play the first and third quarters, then Corral the second and fourth in a bit of a surprising development. But Matt Rhule clearly wants to see what these guys have in the tank, and keeping four QBs on the roster doesn’t make a ton of sense.

However, this isn’t going over well with Carolina fans, and Rhule has been getting roasted for making this decision.

There’s no benefit in doing this bruh. None whatsoever. This PJ Walker experiment should be fucking OVER. Enough is enough. Develop the future, and give your starters/role players some run. PJ has no place on this team unless he becomes full time Placeholder. https://t.co/PBzECO69LB

We really have the worst coach in the league 😂😂😭 https://t.co/n32ASNuMzs

Bro what in the hell. God I hate Matt Rhule. https://t.co/xOGZ2zCMHo

At the very least, it will be worth watching to see which of Walker or Corral looks better. Then again, it’s highly unlikely that the Panthers cut ties with Corral after selecting him in the 2022 NFL Draft.

Still, this is another puzzling decision by Matt Rhule, and he isn’t winning over the fanbase.