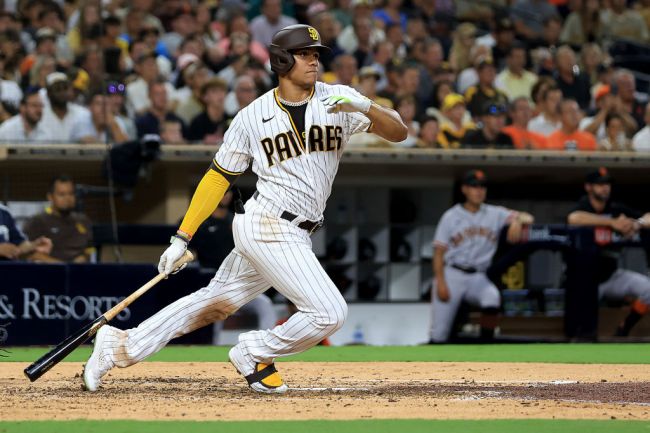 Just 10 days after being traded, Juan Soto is making his return to Washington.

The MLB trade deadline saw the San Diego Padres acquire the superstar outfielder in a blockbuster trade deal. The move, which had been in discussion for weeks, gave the struggling Washington Nationals a massive haul of prospects in return.

It appears the MLB schedulers may know more about the future than the rest of us. Because less than two less after the trade, Soto is returning to Nationals Park.

The Padres and Nationals will meet on Friday for Soto’s homecoming and it’s going to be emotional. Speaking to AJ Cassavell of MLB.com, the star outfielder shared his expectations for this weekend.

It’s Juan Soto reunion weekend, and, “It’s going to be pretty emotional,” he says. Soto accomplished an awful lot in Washington — including precisely what the Padres are trying to accomplish.

“It’s going to be pretty emotional,” Soto explained. “I feel excited to go back and see those guys again. … I’ve done everything for that team. Whatever I did, I was thinking of that team and the fans. If they appreciate it, I will always be glad. If they don’t, there’s nothing I can do about it.”

Obviously, Nationals fans would prefer not to see Soto in the brown and gold, but his expectations for the homecoming are pretty reasonable. Fans can always look back fondly at his time in the red, white, and blue.

Despite turning down a 15-year extension from the Nationals, Soto’s time in Washington is clearly very dear to him too. Following his trade, he made sure to show the team and fans his love. Hopefully, fans will do the same.

I will always feel honored to have been a National. The accomplishment of winning the franchise’s first World Series title in 2019, and to play for such supportive fans during the last five years will never be forgotten.

Given all that Soto accomplished in Washington, fans should welcome him back with open arms. He had a major role in the team’s 2019 World Series win, one of the most resilient and exciting playoffs runs in recent MLB history.

If Soto doesn’t receive a standing ovation, it’s no hard feelings though. After all, he’s undoubtedly in a better spot with the new-look Padres.