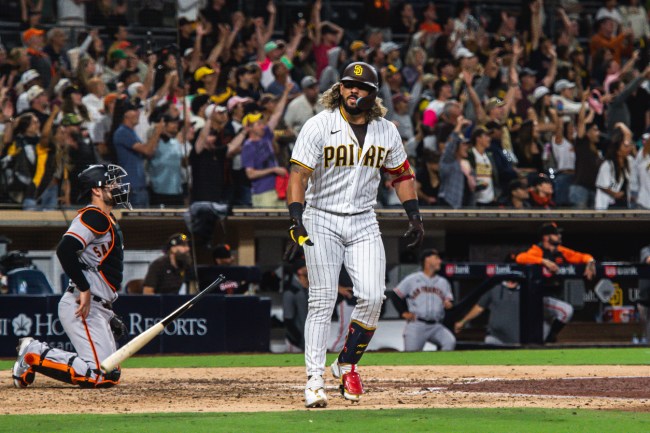 The San Diego Padres suffered a devastating, scary situation early in the game against the San Francisco Giants. C.J. Abrams and Jurickson Profar collided with each other, and Profar ended up being carted off and taken to the hospital for further evaluation.

It was a tough scene at Petco Park against a division rival. However, the Padres did their best to press on in the ballgame. After the Giants scored in the top of the ninth, the game went into extra innings.

There, the Padres provided their fans with fireworks, even though the 4th of July has come and gone.

In the bottom of the 10th inning, Jorge Alfaro stepped to the plate with the bases loaded and smacked a long walk-off hit to deep center. The crowd erupted, the dugout went wild, and Alfaro — once again — provided the dramatic ending to the game.

It was an incredible scene in downtown San Diego, but it didn’t end there.

Alfaro has quickly become a Padres fan favorite. And it all started with one saying earlier this season with his second walk-off hit.

So, of course, EVERYBODY was waiting for Alfaro to utter those words — including the entire Padres dugout.

Alfaro has quickly become a popular name in San Diego, and his flair for the dramatic definitely helps. At the end of the night, Alfaro gave the Padres the victory and gave everybody exactly what they were waiting for.