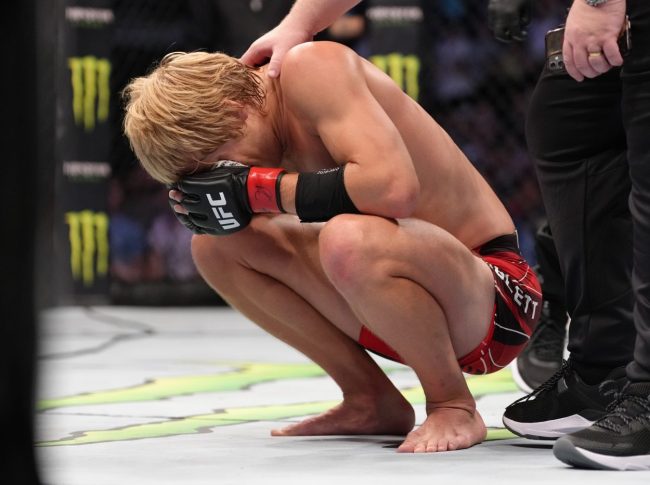 Paddy Pimblett has spent a ton of times in the news this week. The Liverpool native is a star in he making in the UFC due to his impressive in-cage resume, but also his charismatic attitude with a microphone in his hand.

Pimblett caused controversy in the lead up to his fight with Las Vegas native Jordan Leavitt. First, he told Leavitt that he would teabag him “like it’s Modern Warfare 2”, then he exposed his backside to media members at weigh-ins and told them to kiss his a** after some doubted whether he would make weight for the fight.

To Pimblett’s credit, he was able to back up all of his trash talk. The lightweight, who is undefeated in the UFC, submitted Leavitt via rear naked choke at the 2:46 mark of the second period.

But nobody could’ve seen coming what happened next.

“I’d rather me mate cry on me shoulder than go to his funeral next week.”

Pimblett took the mic from commentator Michael Bisping in the post-fight interview and deliver an important, heart-wrenching message. After first dedicating the victory to Lee, a young fan who is battling leukemia, Pimblett deliver a tragic message.

“I woke up on Friday morning at 4 AM to a message that one of my friends back home had killed themselves,” Paddy said. “This is 5 hours before my weigh-in. So Ricky lad, that’s for you.”

“There’s a stigma in this world that men can’t talk. Listen, if you’re a man, and you’ve got weight on your shoulders, and if you think the only way you can solve it is by killing yourself, please speak to someone. Speak to anyone. People would rather, I know I rather they cry on my shoulder than go to his funeral next week. Men start talking.”

Pimblett’s win was impressive, but his message was even more so.