UFC Star Paddy Pimblett Moons Cameras At Weigh-Ins, Tells Those In Attendance To ‘Kiss My A–“ 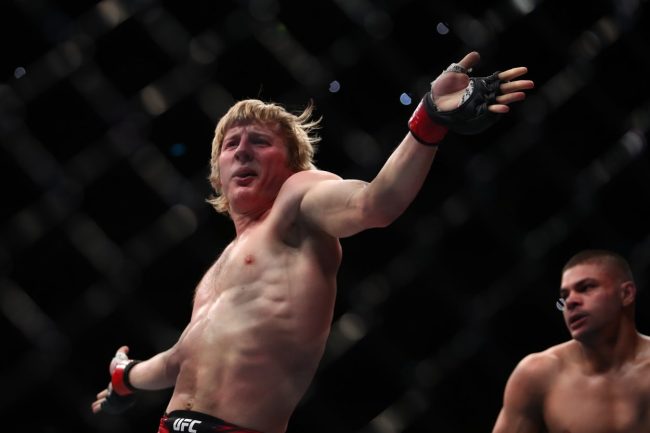 Paddy Pimblett is certainly making a name for himself this week. The Liverpool native is 2-0 so far since joining the UFC with a pair of finishes and 18-3 in his MMA career. At just 27 years old, he’s also one of the company’s most charismatic young prospects.

The lightweight made waves earlier this week when he promised to teabag upcoming opponent Jordan Leavitt “like it’s Modern Warfare 2” in their fight at UFC London on Saturday. Now “The Baddy”, as he known, is back in the headlines after weigh-ins for the fight on Friday morning.

Following speculation that Pimblett was out of shape and was in danger of missing weight for the fight or would pull out of the fight, he had quite the gesture for media members at weigh-ins.

Pimblett made the 156-pound weight limit, and then proceeded to moon the media and cameras at the event.

Pimblett has never missed weight for a fight and previously competed at 145 pounds. But recent pictures of him have led to speculation about his dedication to fighting and fitness.

Leavitt, Pimblett’s opponent on Saturday night, has been similarly interesting in the lead up to the fight. The 27-year-old American is 3-1 in the UFC and 10-1 in his MMA career. He also had an interesting message for Pimblett prior the fight between the two.

Leavitt says his plan against Pimblett is simple: “finish the fight, twerks, go home.” Twerking has become Leavitt’s signature celebration, something that may well have been on the mind of Pimblett with his moon job.