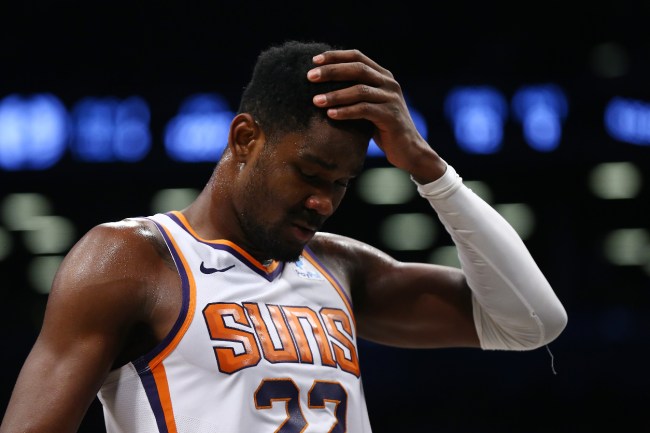 The NBA free agency season has hit a massive standstill thanks to Kevin Durant and Kyrie Irving going nowhere. The Brooklyn Nets are exploring a trade for both players, and all signs point to Irving heading to the Los Angeles Lakers at some point.

On the other hand, Durant has ‘gone dark,’ and the Nets wanted a tremendous amount from the Minnesota Timberwolves in a Durant trade, which is to be expected.

Well, there’s another wrinkle added to this madness. It involves Phoenix Suns center Deandre Ayton and the Indiana Pacers.

The Pacers are interested in signing Deandre Ayton to an offer sheet or even negotiating a sign-and-trade involving Myles Turner, per @WindhorstESPN.

"But holding everything up is the Suns' negotiations for Kevin Durant. … Ayton may have to move on and do his own deal." pic.twitter.com/cSciehuI1p

Why does this affect the Suns’ pursuit of Durant? Well, it’s simple. The Pacers signing Ayton to an offer sheet would force the Suns to either match it or let him walk. If they match it, a Durant trade remains unlikely.

Pressure is on now for the Suns to close on Kevin Durant soon. If the Pacers want Ayton, feels like they could be the third team to help facilitate the necessary assets.

Ayton and the Pacers can blow up the Suns’ plans on Saturday.

For Deandre Ayton, it’s hard to find a better all-around fit for what he desires than the Pacers.

Not only would Ayton be the No. 1 option, but he has Tyrese Haliburton setting him up for years to come as a potent pick-and-roll partner.

It sure makes sense for Ayton to head to Indiana and become the focal point, especially if Myles Turner gets sent out.

Nonetheless, this is not good news for the Suns and their ongoing pursuit of Durant.

What Do The Suns Do If The Pacers Go After Deandre Ayton?

The answer: Nobody knows.

The Pacers have been candidates for Ayton forever, and they have the cap space to make a run after trading away Malcolm Brogdon in a clear salary-dumping move.

If the Suns want to pursue Durant, they need to let Ayton walk. The pressure is on in Phoenix, and the Pacers could throw a massive curveball by signing Ayton to a massive offer sheet.