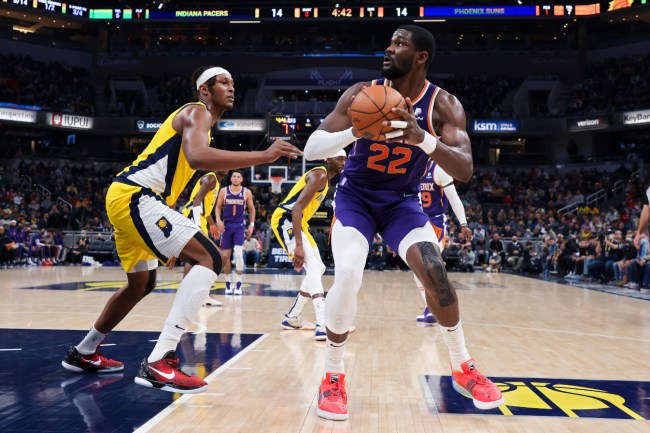 The NBA has frozen as teams wait for deals on Brooklyn Nets superstars Kevin Durant and Kyrie Irving. But another big name is Phoenix Suns center Deandre Ayton.

As of now, nothing has surfaced, although the Indiana Pacers have remained interested in the big man. Ayton is going to get paid by somebody, and if the Suns really want Durant, they will need to let Ayton walk.

Another massive bombshell came across on Monday morning, as Brian Windhorst of ESPN reported that a deal is ‘very close.’

“We believe that the Indiana Pacers are very close to giving Deandre Ayton an offer sheet or executing a sign-and-trade…We could see something with the Pacers and Ayton as early as today.” (via @WindhorstESPN) pic.twitter.com/6iKsfox82T

Windhorst has been pretty spot-on this offseason. If Ayton goes to Indiana, then the Suns will — presumably — shift their entire focus to Durant.

Will The Suns Be Able To Land Kevin Durant If Deandre Ayton Gets Traded?

This is still the million-dollar question.

As Windhorst also reported, the price for Durant has been mammoth.

Teams have been unwilling to meet the Nets' asking price for Kevin Durant, per @windhorstespn.

KD's value "may not be as high as the Nets wanted" pic.twitter.com/uRHm1k5dWW

Nonetheless, the Suns shipping out Ayton would mean they have some money available. That also means the Pacers are seriously trying to trade away Myles Turner. This is really one big domino move in the game of the NBA offseason.

Who knows what happens next. Kyrie to the Lakers? Durant to Phoenix? Something else?

Nobody knows, but the NBA continues to move at a rapid pace.