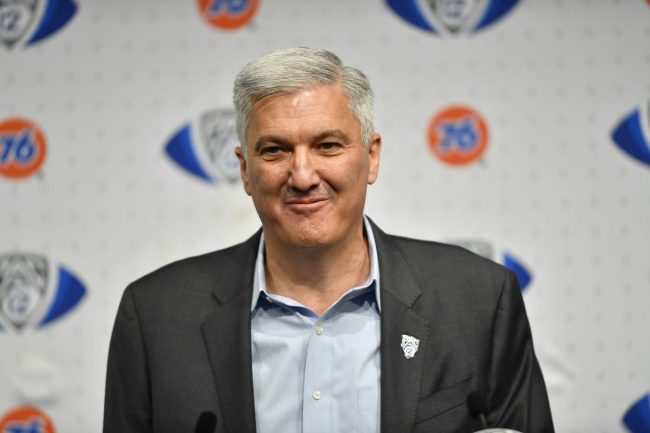 Kliavkoff is, of a course, a bit on the defensive after two of his premier programs, USC and UCLA, bolted for the Big Ten just last month. That move won’t officially take place until 2024. But it has set off a chain reaction that could include fellow Pac-12 schools Oregon and Washington as well as the biggest fish in the pond, Notre Dame.

Earlier this month, Big 12 commissioner Brett Yormak stated that all options were on the table for the conference and that he was officially declaring the conference “open for business.” The Big 12, of course, also lost two powerhouse programs as Texas and Oklahoma bolted for the SEC. That move will not take place officially until 2025.

But Yormak’s comments didn’t seem to sit well with Kliavkoff, who fired back at him when speaking at Big 12 media day on Friday.

It. Is. On.
Pac-12 commish George Kliavkoff about Big 12’s Brett Yormark’s comment about Big 12 is open for business. “I appreciate that. We haven’t decided if we’re going shopping there or not”

“I appreciate that,” he said. We haven’t decided if we’re going shopping there or not”

Those are some fighting words.

You can’t blame Kliavkoff for his trepidation. The Pac-12 head honcho lost two of his flagship programs just a year after seemingly forming an alliance with the Big Ten and the ACC. That alliance is now shattered and it seems as if it’s every conference for themselves as we head toward college football mega conferences.

UCLA Athletic Director Martin Jarmond put the move down to his university’s “significant debt.” That likely wouldn’t be solved by the Pac-12’s struggles to find an adequate TV deal.