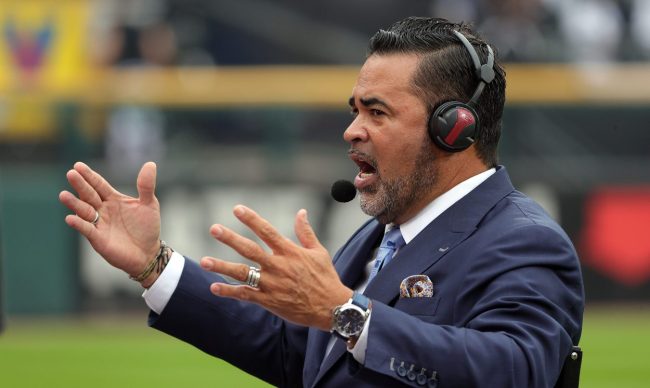 Ozzie Guillen is an all-time great personality in Major League Baseball. The three-time MLB All-Star is also a two-time World Series champ. Once as a coach and once as a manager, and he has a pretty good shout to land in Cooperstown one day.

But Guillen is also never shy about making his voice heard. Guillen’s incredible tenure with the Chicago White Sox provided fans with numerous incredible moments. He’s now been out of baseball for 10 years, but Guillen was back in the spotlight on Wednesday.

Will be interesting to see if it’s possible to get someone’s job by insulting them on a postgame show https://t.co/VvXe9YFRsh

Guillen didn’t like that Heyman spoke out, and quickly fired back with a tweet of his own.

My wife will be mad but tired of this liar talking about me. Your a jelous man that me with shit English do the job you do. All you do is lie about stories. I get paid to talk baseball just like you. I said I love Tony but I gave my opinion and he know how I feel. You always hate https://t.co/YpmksSBngv

That set off a string of tweets with the two arguing back and forth about what was said and their history with one another.

You’re claiming when you said he’s Rick Renteria w/credentials that was a compliment? That’s u being negatuve, not me. I also know you interviewed in SD after saying u didn’t want to manage. It is true I’ve been negative on u after observing u up close in Miami — just my opinion.

Your opinion has always sucked from me. I am not insulting anyone to get no job. If they call me to be commisoner I might take it don't mean I wanted it. Your a loser and always will be one.

I apologize to @NBCSChicago and my family but tired of Jon Heyman using me as his punching bag. He is not here in Chicago he don't know anything stop lying stealing people money with bad stories. Am a man before it all and I won't let him insult me like that.

Guillen eventually came up with a simple solution. Why don’t the two fight? He challenged Heyman to a boxing match to raise money for charity.

Jon you hate me and always bad mouth me. Let's settle it. Let's raise money Jon me and you the ring. Whatever money we raise goes to charity. I am not perfect, but tired you hiding behind you a writer.

Heyman responded to Guillen, but he didn’t except the challenge to a fight. Instead, the New York Post writer suggested they both donate to charity and ditch the scrappin’.

I will not box you as you challenged but will agree to give $500 to the charity of your choice if you do the same for mine. And we can call a truce then if you like.

Not exactly the most valiant move, but probably considered the more adult thing to do. Fans roasted Heyman for his perceived cowardice.

Unfortunately it doesn’t look like that will happen any time soon. But you never know what could happen down the road.