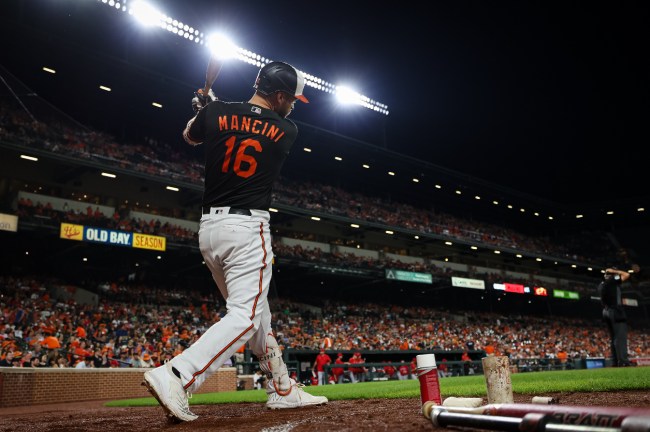 The MLB Trade Deadline is a busy time for everybody. For playoff contenders, they try to acquire top-end talent to make a final push. For the others, they sell pieces to think about the future.

Unfortunately, the Baltimore Orioles are selling once again, and this time they have traded away fan favorite Trey Mancini. According to Dan Connolly of The Athletic, Mancini is headed to the Houston Astros.

Orioles are trading Trey Mancini to the Astros. Sources.

Mancini is heading to the Astros and the American League West in a stunning move. Mancini’s career has been a storybook. He missed the entire 2020 season with colon cancer and worked his way back to the Orioles in 2021.

Mancini is hitting .268 this year with 10 home runs and 41 RBIs, including the most hilarious inside-the-park home run in history.

This did not go over too well, and seeing Mancini in another uniform will take some getting used to.

Orioles fans do not deserve this https://t.co/ru1Kvt13yl

Worst case scenario. I was looking forward to rooting for whoever this year to get him a ring. This SUCKS https://t.co/54sgkJYK82

This extremely likable lovable man should not have to go to that den of scum and villainy https://t.co/pUdclMtG4S

bro just said he wanted to stay tho 😭 https://t.co/SwDHvFYtIH

The Orioles have a real chance to make the playoffs and they trade one of the best players in franchise history who should have played his entire career with Baltimore. That's disgraceful

It will be a tough pill to swallow, but hopefully, the return eases the pain for Baltimore fans. This deal actually expanded to a three-team deal involving the Tampa Bay Rays, and Bob Nightengale provided the entire trade details.

Fans gave him a standing ovation a few days before, and now they watch him head to the Astros.

Let’s see if Trey Mancini can get to the playoffs and have a chance to compete for a World Series title.