Oregon Meets Big Ten For Realignment Discussions, Although We Aren’t Sure Who Was Actually There 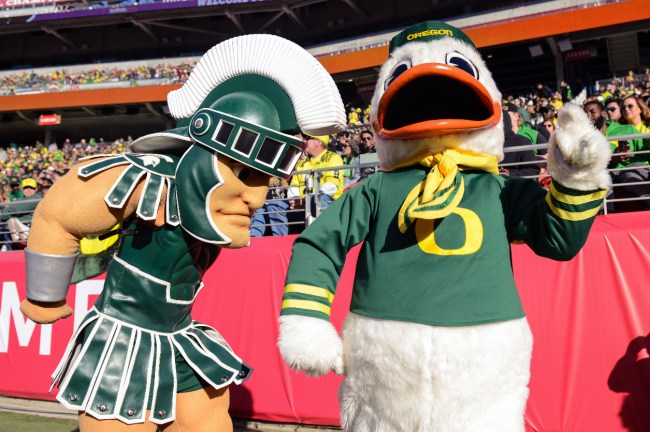 The college football shakeup isn’t going away anytime soon. Previously, Texas and Oklahoma announced they are moving to the SEC in the foreseeable future. Then, this summer, USC and UCLA shocked the world by announcing their decision to move to the Big Ten in 2024.

This move sent shockwaves throughout the country, and the UC Board of Regents has reiterated that they aren’t thrilled with UCLA’s sudden departure.

Now, we have another development: Oregon is trying to force its way into the Big Ten, per Brett McMurphy of The Action Network.

There are a lot of things to take away from this latest. First off, this seems to mean that there are serious talks between Oregon and the Big Ten. With Notre Dame high on the Big Ten’s wish list, they might look elsewhere with the Irish insisting on remaining independent.

However, the interesting thing is that none of the Oregon President, athletic director, or Big Ten commissioner were involved in discussions.

Fans noticed this and instantly put together some hilarious memes and responses.

So who was involved then? The duck mascot? https://t.co/VEWPtKL5uH

"All these important people who would actually make the decision weren't there." https://t.co/mii21fN8Wb

Who was there? Nobody knows. But, it sure seems like Oregon wants to follow USC and UCLA to the Big Ten. If they do, that would be another huge get for the conference.